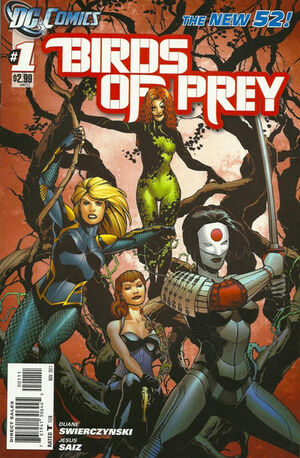 Appearing in "Let Us Prey"Edit

One is wanted for a murder she didn't commit. The other is on the run because she knows too much. They are Dinah Laurel Lance and Ev Crawford – a.k.a. Black Canary and Starling – and together, as Gotham City's covert ops team, they're taking down the villains other heroes can't touch. But now they've attracted the attention of a grizzled newspaper reporter who wants to expose them, as well as a creepy, chameleon-like strike team that's out to kill them.

Retrieved from "https://heykidscomics.fandom.com/wiki/Birds_of_Prey_Vol_3_1?oldid=1661785"
Community content is available under CC-BY-SA unless otherwise noted.