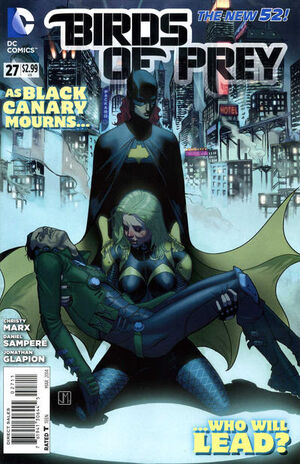 You don't have the luxury of walking away from what you are and what you do because of personal problems... that's what it means to be a leader.

The Birds of Prey have been collected from the Basilisk base from a mysterious benefactor. Naturally, Black Canary is defensive, and reticent to let them take the husband containing her comatose husband Kurt. Her concerns are alleviated, though, when their benefactor reveals herself to be Miss Ettie, the elderly lady whom she met at a coffee shop some weeks ago. She explains that she is much more than the old woman she seems - but she will not be around much longer. In any case, she has assembled a strong medical team to evaluate Kurt's helath. Reluctantly, Dinah agrees to give him up, warning that she will not allow them to do anything to him without her say-so.

As the old woman leads them away, Batgirl notices that everyone - including her - seems to implicitly trust Miss Ettie, whether they've met her before or not. Ms. Ettie explains that here, she is known as Mother Eve, and she helped them because she had determined that they deserved her help. However, she needs their help in return. She is older than she appears - perhaps by centuries. She was once a queen of Ancient Meroë, but in other times she was a slave. In nearly every life, though, she was a mother - and she has outlived all of her children. Some of her children, though, have developed unusual abilities - passed down through her unique genetic inheritance. She believes that Black Canary and others like her have gained their abilities through a genetic link to her.

The favour she needs of them is related to her immortality. There are others like her - some friends and some enemies. Her greatest enemy, though, will be coming for her soon. His name is Ra's al Ghul. In fact, she has determined that he is listening to this very conversation, and she has Uplink - recently recruited from Basilisk - cut off his spy transmissions. Having certainly been listening remotely, Ra's al Ghul assures his assistant that he will turn Mother Eve's new allies against her. Sensing that Batgirl and Black Canary have loose ends they need to tie up between each other, Mother Eve leaves them alone in the room.

Before she can follow, Batgirl grabs Uplink, who explains sheepishly that she was made to use her powers as Uplink by Basilisk, and she was not given the choice. Though Batgirl believes her, she is still suspicious, requiring Condor to vouch for her. Batgirl turns her attention to him, then, reminding that he knows a lot about Basilisk, making him a loose end as well.

Freely, Condor admits that he was recruited into the NSA straight out of college, and he was quite successful there. Eventually, he began to develop increasingly painful migraines which led to his dismissal from his position with the NSA. With nothing but pain left to his name, he decided to take his own life by throwing himself from a bridge. In mid-air, he was caught by Tsiklon, who sedated him and took him to Basilisk. There, he learned that his headaches were caused by an ability he needed to embrace. Together, they developed his telekinetic power, and that led to a romantic relationship. Not long after Superman appeared in Metropolis, Tsiklon introduced Condor to Regulus, who claimed that Basilisk was meant to use super-powers to prevent other super-powered beings from enslaving ordinary people. This seemed noble enough until their missions demonstrated the unnecessary violence that his team-mates seemed to love. When Regulus gave them a mission that saw him killing an old woman with the power of healing, Benjamin knew he was being used, and had to leave.

He began using his position to help those that Basilisk had forced into working for them to escape. Tsiklon discovered his actions, though, and thinking he could trust her, he admitted it. Unfortunately, she told the others, and he was dumped and left for dead. He barely survived, found and rescued by one of the prisoners he had helped to escape from Basilisk's clutches. The man helped Benjamin develop the wings that are now a part of his costume, and he developed the persona of Condor, seeking a way to take down Regulus. That was when he ran into the Birds of Prey, and realized that they could help him with that goal. Having told the truth, Ben hopes that the others will accept him as a member of their group. Batgirl and Strix accept his story, but while Canary believes him, she doesn't care. Her care for her husband is more important to her. This comes as a blow to Condor, because he has been harbouring feelings for her, and not in a particularly covert way.

Mother Eve's doctors explain to Canary that whoever implanted the devices in Kurt's body did a lot of damage, causing a vegetative stat with little chance of recovery. For all intents and purposes, Kurt Lance is brain dead. Dinah won't accept that answer, and begs them to do something. Uncomfortably, the doctors remind that they will need time if there is to be any hope.

Sadly, Condor realizes that Kurt's discovery has stymied his chances with Dinah. He takes to flight to clear his head, and is distracted by a flare from Mother Eve's barge. There, he finds the others have gathered with a man named Ed Wallis, a former detective with the Gotham City Police Department who now works for Mother Eve. Wallis explains that some of Mother Eve's organization's spies have begun making peculiar nonsensical reports, and there has been no sign of the city's usual crime. He feels it warrants investigation. Batgirl, eager to get back to Gotham sees it as the perfect opportunity to do that, but Dinah hangs back, intent on staying with Kurt. Angrily, Batgirl warns that there's nothing she can do for him, whereas Gotham needs her. By turning her back on Gotham, Dinah turns her back on the team. Grimly, Dinah responds that she has made her choice.

Angrily, Batgirl informs the others that Dinah has quit the team, and they head back to Gotham.

Retrieved from "https://heykidscomics.fandom.com/wiki/Birds_of_Prey_Vol_3_27?oldid=1412941"
Community content is available under CC-BY-SA unless otherwise noted.