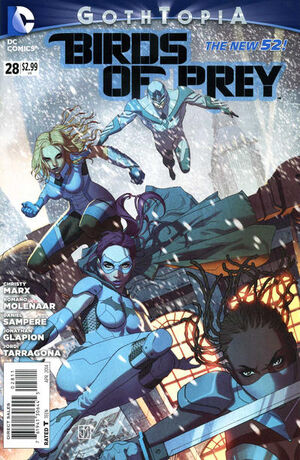 How can I tell her I might be making a deal with the devil?

Appearing in "Wings of Truth!"Edit

Synopsis for "Wings of Truth!"Edit

Crime levels are at record lows in Gotham City, recently, and the Wings of Truth had a hand in that. They are so universally loved that local shop owners have been asking them to lend their image to endorse products. The city's skies are full of blimps, creating a spectacle that Bluebelle and Artemis can only admire from the ground as their friend Eagle flies high above to appreciate the sight. When he returns to the ground, he admits that he had gone up with a purpose, but forgot it as soon as he saw the blimps. Something has him thinking he was looking for someone, and when Warbler pulls up on her motorcycle, he believes it was her - but she insists that she was never missing. He swallows his confusion, and they all ride together as a team to the Wings of Truth Children's Charity Circus event. Using their combined skills, the Wings of Truth put on a display of acrobatic whimsy and fun for the children, typifying their status as residents of the City that Cares.

That evening, they gather to watch a movie together, but their plans are interrupted by the Bat-Signal's shining in the sky. As they head toward the scene, they are surprised to learn via dispatch radio that Batman has turned against the city, and is currently surrounded by the police, along with his allies Catbird and Brightbat. They arrive in time to see Batman taken down, and Bluebelle asks Catbird to explain. She reveals that Batman has become lost in a delusion, thinking that their world is a lie. He had to be stopped for his own good. Doctor Crane claims that he can help rehabilitate Batman, and the Wings of Truth leave their mentor in his capable hands.

In Batman's absence, though, the Wings of Truth are required to deal with the City's rare crimes, and they do an admirable job of it, until they receive word that Batman has banded with Poison Ivy to escape the Crane Rehabilitation Center. They arrive to find Batman and Ivy in a face-off with Catbird, Brightbat, and the Gothamite. Upon seeing Warbler there, Ivy reacts with disdain, pointing out that she, of all people, should have noticed that they've all been poisoned. A fight breaks out, and suddenly, Bluebelle remarks that the situation is under control, and sends her three companions home.

That night, as they sleep on their couches, a man sneaks up on them, and sprays a gaseous vapour into Warbler's face. The chemical causes her to wake, breaking free, slowly, of the illusion that she has been living. She is Black Canary - Dinah Lance - and Gotham is not the city of hope. The place she had once seen as the beautiful home of the Wings of Truth appears now to be a disgusting boiler room.

Her confusion is answered by Ra's al Ghul, who explains that the world she has been living in for days is nothing but a mass delusion propagated by the Scarecrow. He warns her against waking her companions, as the delusion is such that any indication that the truth of it will be revealed results in violent rejection, to perpetuate the lie. Ra's explains that he is immune to the chemical's effects, and has crafted an antidote which he has already given her. She has only an hour to get her friends and herself out of Gotham before the delusion reasserts itself.

He explains, in the meantime, that Batgirl has fallen completely under Crane's control, and is no concern of his. He came specifically to offer Dinah a deal. With an inevitable confrontation between himself and Mother Eve on the way, all he asks is that she not interfere with him when the crucial moment he has been preparing decades for comes. Dinah responds that he has nothing to offer that would make her betray Ms. Ettie, but he produces a small vial of serum he claims made from the fluids of the Lazarus Pits, which he knows will cure Dinah's comatose husband Kurt. He leaves the vial with her, welcoming her use of it, with the knowledge that it can prove his ability to deliver on promises. Ms. Ettie cannot offer the same.

After spending half an hour on her plans to get Strix and Condor out of the city, Dinah has only another thirty minutes to try to make that plan work. To get that help, though, she must pretend that she's still under the delusion. She wakes them, claiming that Bluebelle called for them, and needs them at the waterfront. She senses their suspicion as she leads them to a boat, fast talking them through it in order to keep their mind off of her deception. Speeding away in the boat, she hopes to get her friends to Ms. Ettie's nearby barge where they can be treated.

On the barge, Ed Wallis tries to convince Dinah not to go back to the city to save Batgirl, warning that her immunity has worn off, and Mother Eve is looking into it. Feeling guilty, Dinah had to lie to him about the source of her immunity, unsure of whether to accept Ra's al Ghul's offer or not. Checking in on Kurt makes the truth all too clear that she can do almost nothing to help him recover - and neither can Ms. Ettie's doctors. She is interrupted from her contemplation by Wallis, who warns that Batgirl is on her way.

Dinah is happy to see that Batgirl is no longer under the influence, but Barbara has a question for her. During the delusion, they had all been together, even though Dinah had quit to stay by Kurt's side - she wonders why Dinah was there. Dinah explains that after the others had gone back to Gotham, she realized she'd made a mistake. Standing by Kurt's bedside would never make him better. She could do more good with her team. Barbara accepts her answer, but warns that returning to a leadership role in the team is out of the question. Dinah agrees, understanding that her decision to quit left the others feeling distrust for her. She encourages Batgirl to lead in her place.

Barbara isn't sure she wants to lead, given that it was never her team. She may have recruited Strix to join them, but her real life is a disaster, and she doesn't feel like it's stable enough to support the leadership role. Dinah reminds that she had made the same excuse, and Barbara had rejected it. Smirking, Batgirl agrees to lead, but only until Dinah sorts her own issues out. Gratefully, Dinah thanks her, and accompanies her to brief Wallis on what happened in Gotham to make the delusion fade.

Hours later, Dinah visits Kurt's room alone, and contemplates using the vial Ra's gave her, though it may be a deal with the devil.

Retrieved from "https://heykidscomics.fandom.com/wiki/Birds_of_Prey_Vol_3_28?oldid=1412942"
Community content is available under CC-BY-SA unless otherwise noted.