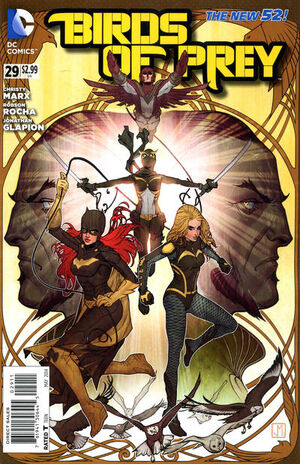 Appearing in "The Eve of Battle"Edit

Synopsis for "The Eve of Battle"Edit

Within the barge owned by Mother Eve, Condor trains in the gym, reflecting on how Kurt Lance's sudden reappearance has thwarted his budding romance with Black Canary, who had been married to Kurt until she thought she'd killed him. His emotional turmoil has the surprising effect of causing his telekinetic ability to be shaped into a blade, which unexpectedly tears a hole through his punching bag. His confusion, though, is disrupted by the sound of Canary's cry. When he heads up onto the deck to check on her, though, she warns him to go away.

Suspecting there was bad news, Condor looks to Kurt's doctor for answers. Dr. Shalev explains that Kurt's brain is so badly damaged that he will remain in a vegetative state. Surgery to remove the implants in Kurt's body has prevented anyone from using Kurt's body to effect others' powers, but the only choice that remains for Dinah is whether to maintain life support despite no hope of his recovery, or to let him die peacefully. Naturally, Dinah didn't take well to either of those options.

Outside the infirmary, Condor is accosted by Uplink, begs a moment of his time to express a worry. She had been trying to teach Strix computers, and found that perhaps a tablet would be easier for her. Unfortunately, she kept scratching the screen with her sharp talons, trying to write on them, requiring many replacements. It was only recently that she discovered the last un-scathed tablet with a message reading "gone fine batgurl." Condor understands that Strix must have gone looking for Batgirl in Gotham City, and agrees to go looking for her.

Dinah, meanwhile, contemplates a third option for Kurt, besides death and unwaking coma. Ra's al Ghul had gifted her with a small vial of fluid from the Lazarus Pits, and despite her loyalty to Mother Eve - whatever that is worth - he intends to attack Mother Eve at a critical moment, and Dinah's cooperation is necessary if he is to help Kurt to a full recovery. Returning to the Kurt's room, Dinah asks Dr. Shalev to leave her alone with him. Once alone, she calls on Kurt to show her any sign that he is still in there somewhere, but there is no response. Seeing no other option, she cycles the fluid into his IV drip, and waits. She begins to doubt herself, until she hears Kurt wheezing a request for some water.

Naturally, the doctors are surprised, and Ed Wallis remarks out of earshot to Mother Eve that he doesn't trust the miraculous recovery. Both of them know that his recovery signals the first move in Ra's al Ghul's plan against her, and that Black Canary has been compromised. Even so, Mother Eve is willing to stick by her initial judgment of Dinah, and will live or die by it. That may come to pass soon, as Ra's and his men are fast approaching on their own ship, and will likely arrive within the hour to attack at nightfall. Mother Eve responds by sending word to Condor and Batgirl.

Flying over Gotham, Condor admits to himself that the only reason he came to Gotham was to clear his head, and not to look for Strix. He has trouble shaking the rage he feels every time he thinks about Kurt. He is distracted abruptly by the sight of a drone flying toward him. He destroyes it, and discovers a communication device in the wreckage, calling on him to talk. It is the voice of Ra's al Ghul, who explains that by nightfall, the battle between he and Mother Eve will have begun, and he asks that Condor stand aside in the moment that will come when he and Mother Eve are alone together. This simple request comes with great reward. Gritting his teeth, Condor responds that no amount of money could convince him to turn coat, but Ra's points out that he does not offer money. Instead, he explains that he intends his assassins to kill Kurt Lance, and thereby clear the path to Dinah's heart for him. Condor responds that he wants proof, asking that Ra's kill Kurt before anything else, and that Dinah be left alone. Ra's agrees. Moments after the communication device self-destructs, Condor receives the call from Mother Eve to rendezvous with Batgirl and Strix at the helipad.

Ra's, meanwhile, is pleased with himself. His game has been played well, and now the pieces are in place for the finale. He turns to his assembled League of Assassins, and encourages him to fight in the coming battle in his name, but with a slight change of plans. He orders Nightlord to kill Kurt immediately upon reaching the barge, and to ensure that Condor sees the deed is done.

On the barge, Batgirl receives a briefing from Wallis, but senses that he is holding some information back about Kurt's sudden recovery. Checking in on Dinah, she comes up with a defensive plan, and Dinah has to remind her that she gave up leadership of the Birds of Prey to Barbara, and she doesn't have to sign off on her plans. Mother Eve is sent to her safe-room, but demands that Batgirl and Black Canary accompany her, leaving Condor to take position on the tower for aerial defence. He agrees to the plan, but notes that there is something odd about it. All the guns are being locked away, as it is expected to be a sword-against-sword fight, in accordance with the code of battle to which both sides will adhere. On their way to the safe room, Batgirl wonders exactly why Ra's would need to attack Mother Eve. She explains that her regeneration comes from within, but Ra's' comes from the Lazarus Pits, which could be destroyed or lost. He wants to know how her power works, and to learn to duplicate it. She will not allow that to happen.

As the time is coming for her regeneration, Ra's has timed the battle to interfere with it, and that is why Eve must be holed up in her safe room for the next two to three hours, and protected. She asks, though, that it be Dinah who stands guard as the final barrier to Ra's attack. The room is designed specifically for Dinah to make her stand. The process begins suddenly, and Dinah protests futilely that she can't be the one to do it. Batgirl warns that there is no alternative, and wishes her luck as she closes the door behind her. Despite this, Barbara is worried about whether she can trust her friend in this.

Whether she can trust Dinah or not, though, it's too late to worry about it, as the League of Assassins has already begun its attack.

Retrieved from "https://heykidscomics.fandom.com/wiki/Birds_of_Prey_Vol_3_29?oldid=1412943"
Community content is available under CC-BY-SA unless otherwise noted.