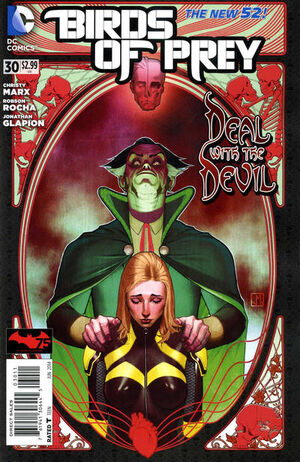 I thought this would be hard. I thought it would tear me apart to accept your offer. And then I heard Kurt's voice as though he were here with me. And I heard him say, "That's not who you are."

The Birds of Prey are barely holding their own against the first wave of Ra's al Ghul's League of Assassins as they protect Mother Eve and her barge. They have been asked to do so for the next few hours, while Mother Eve completes her metamorphosis - the secret to her immortality that Ra's al Ghul seeks. The very last line of defence is Black Canary, whose loyalty to Mother Eve may be in question, given the promises Ra's al Ghul made to her.

Black Canary, meanwhile, struggles with the knowledge that Mother Eve has placed her trust in her, while she is still considering the deal with Ra's. If she allows him to learn Mother Eve's secrets, he will give her the means to bring her husband Kurt back to his former self, after years of being comatose. Taking that deal would give her Kurt back, but it would also betray everything that she is, as well.

Condor made his own deal with the Demon's Head. Having fallen in love with Black Canary some time ago, his jealousy when Kurt came back into the picture led him to beg Ra's to have Kurt killed during the attack. All he has to do is look away, and let things progress as Ra's wants. Then, Dinah will be his. However, the deal he made weighs on him, and he decides that he ought to go down to the infirmary and protect Kurt from the men he asked to have him killed.

Ra's al Ghul's second wave of attack brings smoke-bombs with it, and by the time Batgirl gets the smoke cleared from the deck, she can only assume that Ra's slipped past her defence in the interim - leaving the rest of the battle up to Dinah.

Outside Mother Eve's chamber, Dinah hears Ra's coming, and soon the door opens to prove her right. He wonders if the sample of Lazarus Pit fluid he provided her was effective, and she agrees that it was - though her trust is not so easily won. Smirking, Ra's presents her with the resto f the cure, suggesting she go to her husband, and reap the rewards of a wise decision. Cautiously, she reaches for it, but cannot bring herself to take it. Instead, she kicks it from his hand, destroying it. Angrily, Ra's reminds that she is sacrificing her every happiness for an old woman who cares nothing for her brief life. Dinah responds that whatever Mother Eve might think of her, her husband would not forgive her for making the wrong choice. Annoyed, Ra's orders her killed, and an assassin appears behind her with a garrote. Whipping out of his grip, she recognizes him as one of the same men who had attacked her years ago during the storm in Gotham City.

She breaks free of his grip and rushes down the hallway to the deck, where Strix is waiting to engage him, giving Dinah the opportunity to return to stop Ra's. Though Strix is wounded, her status as a Talon prevents it from killing her, and she retains the strength and presence of mind to see that her quarry is killed, and thrown over the side of the barge.

Dinah manages to catch up before Ra's al Ghul can get into the locked room where Mother Eve is resting. Despite Ra's warning that he is protected from her Canary Cry, she has since realized that the room she was stationed in was designed as an amplifier, just for her. She unleashes her cry, filling the room with a powerful screech that drops Ra's to his knees. By the time her scream subsides, the door to Mother Eve's room opens from the inside, and out steps a much younger woman - a ten-year-old child - who explains that Dinah's job is done. Ra's al Ghul's opportunity to learn her secret has passed, and with disdain, he warns that he will return, accounting for the lessons he learned today, and one day, he will grind his heel on Dinah's grave.

With some surprise, Dinah watches as Ra's and his men simply leave, with nothing more to be gained. Mother Eve explains that at this young age, she now has an entire life ahead of her, and the benefit of her many centuries of memories to inform it. She directs Dinah's attention to the splattered fluid that had been Ra's cure for Kurt, and suggests she smell the chemical within. Dinah recognizes its bitter-almond odour as cyanide. The deal had been a lie. Ra's would never share his most precious resource - no more than Mother Eve would share hers. Mother Eve explains that it is part of Ra's al Ghul's madness that he only sees the worst in others, but she knew all along that the good in Dinah was enough to ensure that she would not fall victim to his scheme.

Many hours later, Mother Eve and the Birds of Prey say their goodbyes, and brace themselves for whatever is to come.

Retrieved from "https://heykidscomics.fandom.com/wiki/Birds_of_Prey_Vol_3_30?oldid=1412944"
Community content is available under CC-BY-SA unless otherwise noted.