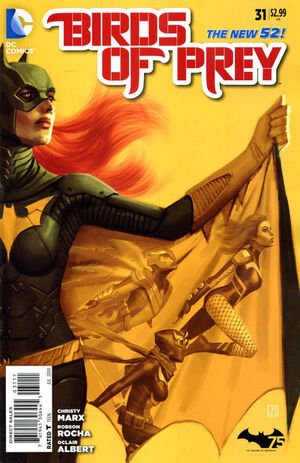 We do what we can today. That's all we can do. The future has to take care of itself.

At Gotham Port, a Singaporean smuggler called Axton is annoyed that the other Asian smuggling groups have refused to work with him - not that he's giving them much choice. Before they can protest, he uses an unexpected ability to jump through space to kill all of the bosses but two, leaving them with no choice but to join him or die. He demands to know who else stands in the way of his owning the Gotham City Port, and meekly, the remaining smugglers explain that the police commissioner is the greatest barrier. Axton decides to handle Jim Gordon himself.

Gordon prepares to interrogate an informant on the Gotham Port smuggling operations when he discovers that the man has been murdered, despite the fact that there was no way in to the interrogation room. In blood, the message "Gordon is next - Axton" is scrawled on the wall behind the body. All Jim can think is who is Axton?

Meanwhile, on Mother Eve's barge, Black Canary tends to her husband, Kurt Lance, who has recently recovered from a coma. Unfortunately, he doesn't remember who she is.

Later, Jim meets with his old friend Ed Wallis. Ed had retired a while ago, but he still has an interest in what Jim is doing - especially when it appears to be troubling him so much. Sighing, Jim admits that he had three of his informants murdered without explanation or clue, besides the name Axton. He is concerned that the killer might be a super-human. After saying their goodbyes, Ed immediately calls Batgirl to warn of the trouble the commissioner is in.

Mother Eve pulls up all the information she can on Axton Loong, whose power allows him to teleport near instantaneously. His power is limited to approximately twenty-feet per jump, though. His power made him arrogant, and he rose in the ranks of criminals to become a killer. Ed warns that Gordon is the next target, and Batgirl insists that they have to help him. She begins memorizing the container yard at the Gotham Port, hoping to prevent any surprises. Condor warns that the they will have to react very quickly and remain at a safe distance. Canary wonders if there might be a way to predict his movement patterns.

At that same time, Axton appears in the middle of the police precinct and kidnaps the Commissioner before anything can be done to stop him. He drops Jim in the container yard and commands him to run for his life so that he can be hunted. As Jim begins running, he analyses his situation, determining his location and attempting to keep his back to hard surfaces so as to prevent his being stabbed by surprise.

Condor flies over the container yard, spotting Axton suddenly, but when he approaches, the man disappears. He loses track of Axton just as Axton finds Jim Gordon. Fortunately, Strix finds them both, and leaps into the path of Axton's blades. She provides enough distraction that Jim can escape while the rest of the Birds of Prey catch up to Axton. He continues to teleport away from their attacks, until he makes the mistake of teleporting into the path of one of Dinah's Canary Cries, which disorients him enough that Condor can knock him down.

When he falls at her feet, Batgirl pins him and beats him senseless, prompting Jim Gordon to chide her for being too brutal, sarcastically suggesting that she might kill him too - like she killed his son. Ignoring the barb, Batgirl injects her prey with a tranquilizer and gives him up to the commissioner.

Later, Barbara has to admit that she thought about killing Axton. It had only been her father that stopped her. Dinah insists that Barbara wouldn't have done it. She saved her father, and that's all that matters. Sadly, Barbara worries at just how many enemies her father has earned himself - she can't save him every time. Dinah responds that the future will have to take care of itself.

Retrieved from "https://heykidscomics.fandom.com/wiki/Birds_of_Prey_Vol_3_31?oldid=1412945"
Community content is available under CC-BY-SA unless otherwise noted.