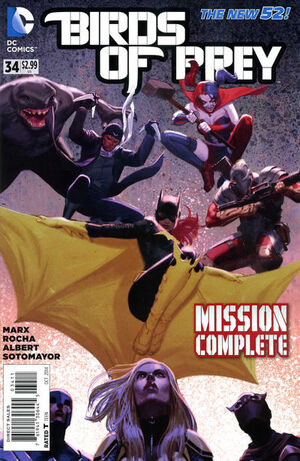 It's too late. I'm done. Done with the Birds of Prey and done with you. I'm going back to my own life. Don't call me. Don't contact me. I won't answer.

Amanda Waller has promised to tell Black Canary the ugly truth about her husband, knowing that this conflict would come eventually. She explains that Kurt Lance had never loved Dinah the way she loved him. He hadn't considered marriage until something changed his mind. He came to Amanda after the briefing for their Gamorra mission, and set up a quick clandestine marriage. He had thought that they would all die on the mission, and the marriage wasn't meant to last. He had done it for her, because he wanted Dinah to die happy.

Meanwhile, the battling Birds of Prey and Suicide Squad are attacked by a third group of angry terrorists, requiring the metahumans to band together and protect their target, Dr. Amadou Mambety.

Dinah disbelieves Amanda's story, and fights her, prompting Amanda to comment that she is fighting like a rabid dog. Her rage seems unusual, given that Amanda can tell that Dinah knows she isn't lying. Collapsing in tears, Dinah admits how Regulus used Kurt's body and bringing him back to life from that coma damaged his brain. He doesn't remember who she is or was. Amanda explains that the resurrection process wiped his memory long before Regulus got a hold of him. She had wanted to spare Dinah the pain, and so she had let her believe he was dead. Offering her hand, Amanda suggests they let Kurt decide where he belongs.

The pair return to their teams, insisting that there is no further need to fight. Amanda takes her team and leaves, leaving Batgirl to demand what that had been about. Dinah explains the shared history on Team 7 between her, Amanda, and Kurt, adding that she is to set up a neutral meeting so Amanda can see Kurt for herself. Bitterly, Batgirl comments that the rest of the team has earned the right to be present at that meeting.

Soon, they are all back in Gotham City, and Dinah allows Amanda to meet with Kurt, who doesn't remember her. She reveals to him a bit of their history and offers him the chance to receive the rehabilitative care he needs, and the freedom he wants. Dinah admits that while she doesn't want him to go, she will not stand in his way. After a moment of thought, Kurt accepts Amanda's offer, and they leave immediately. Dinah is hurt that he doesn't even say goodbye, realizing that even the chance to choose couldn't awaken feelings for her in him. Batgirl is unsympathetic, explaining that when Dinah kept her in the dark on all of this, it jeopardized a life and damaged their trust. Angrily, she states that she is done with both the Birds of Prey and Dinah, intent on returning to her own life in Gotham.

Frustrated and hurting, Dinah flies away. Condor chases after her, but Batgirl warns that Dinah had used him, too. He responds that he is willing to forgive it. When he catches up to Dinah, he promises that they don't have to commit to anything for now. They can just fly.

Turning to Strix, Batgirl admits that she hasn't been as good a friend to her as she thought she was. The team wasn't enough for her, but Barbara can't afford to drag her into her own life. Mother Eve interjects that she will take Strix in. With access to biotech that can provide her with a voice, Strix will have much to do there. Somewhat sadly, Barbara agrees, and hugs her friend to her, suggesting that next time they see each other, she should tell her everything she never could.

Despite this parting of ways, Mother Eve is aware that the future holds more for the Birds of Prey, in one form or another - but things are going to get worse before they get better.

Retrieved from "https://heykidscomics.fandom.com/wiki/Birds_of_Prey_Vol_3_34?oldid=1412948"
Community content is available under CC-BY-SA unless otherwise noted.