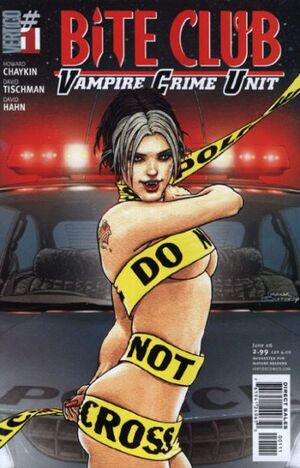 Roll in that tongue, Macavoy -- Risa can turn you into a puddle of red jelly in a heartbeat.

Appearing in "Watching the Detectives"Edit

Synopsis for "Watching the Detectives"Edit

The Vampire Crime Unit discover the body of a woman named Amadeus Tyne at a trendy vampire club called Heavy Flo. Risa Del Toro is present, but disappears before the cops arrive. Hector Cruces and Bonita Lou Yama interogate a witness, but come up with few results.

Cruces and Bonita go to another club called Hozzier Daddy - a club owned by Risa Del Toro. Bonita attempts to question the bartender, but he decides to run from the scene. Bonita gives chase and fells the suspect by shooting him in the buttocks.

Fortine later meets with Carrie Stein privately. Stein is tired of Risa's devil-may-care attitude and professes that she owed no loyalty to her. She tells Fortine that Risa lied about her whereabouts the evening prior.

Still later, Bonita and Hector go to the morgue where they identify the victim from Heavy Flo. The woman is Amadeus Tyne Leopold, the daughter of a judge that Risa has in her pocket.

Retrieved from "https://heykidscomics.fandom.com/wiki/Bite_Club:_Vampire_Crime_Unit_Vol_1_1?oldid=1415227"
Community content is available under CC-BY-SA unless otherwise noted.