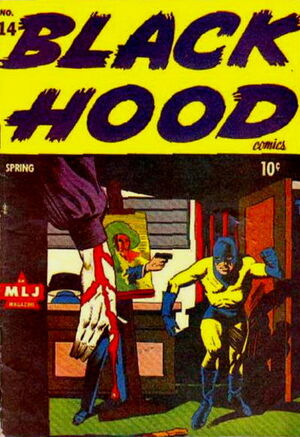 A boxer takes a dive and later dies. The Black Hood and reporter Barbara Sutton are on the case.

A washed up, and drunk, opera singer wants to make a comeback, but with so many many people mocking him he goes on a murderous rampage dressed in a Crow's costume.

Retrieved from "https://heykidscomics.fandom.com/wiki/Black_Hood_Comics_Vol_1_14?oldid=1559653"
Community content is available under CC-BY-SA unless otherwise noted.