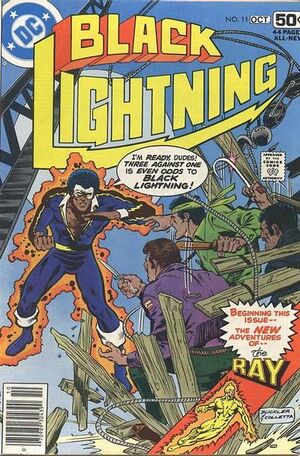 Appearing in "All They Will Call You Will Be...Deportee!"Edit

Synopsis for "All They Will Call You Will Be...Deportee!"Edit

Appearing in "The Rise and Fall of the Ray"Edit

Synopsis for "The Rise and Fall of the Ray"Edit

Recovering from a battle, the Ray manages to use his powers to douse a fire, but passes out from the strain and sinks into Gotham Bay.

Retrieved from "https://heykidscomics.fandom.com/wiki/Black_Lightning_Vol_1_11?oldid=1415192"
Community content is available under CC-BY-SA unless otherwise noted.