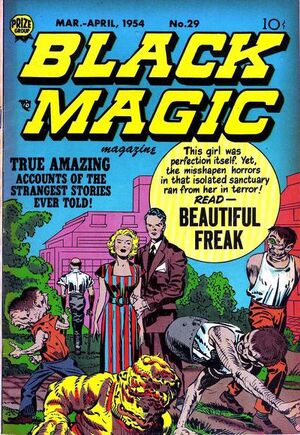 Appearing in "The Monsters of St. Laurant"Edit

Synopsis for "The Monsters of St. Laurant"Edit

Synopsis for "The Greatest Horror of Them All"Edit

Johnny lives in Sanctuary where other deformed people live free from the prying eyes of the public. He falls in love with Elena, the lovely secretary, until he learns her secret, that she too, is yet another freak.

When a witch called Madame Cyanide shows up in town a local invites a debunker who calls himself Mr. Tricks to expose her as a fraud. She puts a curse on him, but the town doctor tells him his skin irritation is due to exposure to acid. When farm animals take ill, Mr. Tricks surmises that their surroundings have been tampered with. The townspeople become angry and head out as a mob to Madame Cyanide's place. Mr. Tricks gets there ahead of the mob in order to warn her and is surprised when he sees the silhouette of what looks like a woman riding a broomstick cast against the moon.

Appearing in "The Flying Dutchman"Edit

Synopsis for "The Flying Dutchman"Edit

Retrieved from "https://heykidscomics.fandom.com/wiki/Black_Magic_(Prize)_Vol_1_29?oldid=1415656"
Community content is available under CC-BY-SA unless otherwise noted.