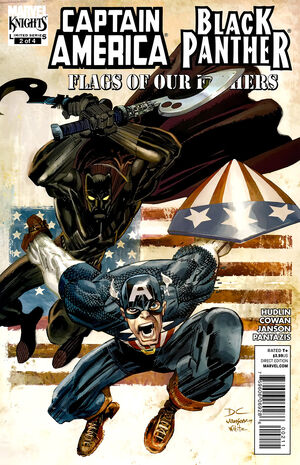 ... Hitler and the Third Reich is the greatest of evils and it's time for all good men to come together and fight.

For the first time ever, see the full story of the first meeting of Captain America and the Black Panther! It’s a World War Two adventure featuring a young Steve Rogers, the Black Panther and Nick Fury and his Howling Commandos in combat with the nastiest Nazi villains in the Marvel Universe - Baron Strucker & the Red Skull!

Retrieved from "https://heykidscomics.fandom.com/wiki/Black_Panther/Captain_America:_Flags_of_Our_Fathers_Vol_1_2?oldid=1414950"
Community content is available under CC-BY-SA unless otherwise noted.