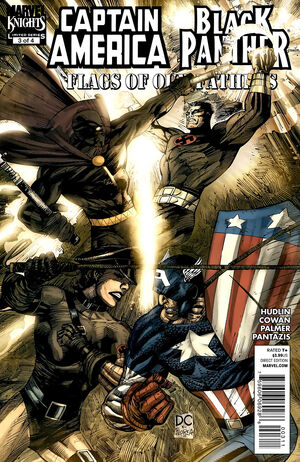 It’s all-out action as Captain America and the Black Panther wage total war against the Red Skull and his super-powered Nazi platoon. Master Man, Warrior Woman, and the armless Tiger Man all attack Wakanda. Cap squares off with Master Man. Warrior Woman drops from the sky straddling a Nazi Bomb. She is engaged by the Black Panther who runs his plane into her. Meanwhile, Tiger-Man attacks T'Chaka and S'Yan. He quickly subdues T'Chaka and promises to kill him if Wakanda does not surrender. To Be Continued.

Retrieved from "https://heykidscomics.fandom.com/wiki/Black_Panther/Captain_America:_Flags_of_Our_Fathers_Vol_1_3?oldid=1656230"
Community content is available under CC-BY-SA unless otherwise noted.