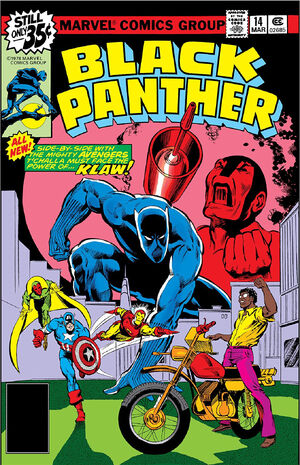 My country is not in the market for advisors--either Cuban or American! We merely wish to know -- about the world outside!

Appearing in "The Beasts in the Jungle!"Edit

Synopsis for "The Beasts in the Jungle!"Edit

The Black Panther has returned to the Wakandan Embassy in New York and proclaimed that the formerly isolated country of Wakanda is entering into diplomatic relations and trade with the world. As the story develops we learn that Monica Lynne, Kevin Trublood, and his enemy Wind Eagle are in pursuit of him. As the Panther later journeys through the rooftops of New York, he spots his arch-enemy Klaw. Klaw is in a weakened state and before the Panther can reach him, a local gang The Thunderbolts accoust Klaw and take his powerful Sonic Horn. The Panther tries to stop the threat but a gang member uses the horn to blast him. The Panther retrieves the comatose Klaw and takes him to Avengers Mansion and stores him with his team mates in a protective statis.The Panther then pursues the gang.

In this interim, an reluctant gang member, Jackie, is forced to examine and harness the power of the Sonic Horn. Jackie does so. But at that time, the Black Panther raids the gang again. Jackie powers the Sonic Horn to create a creature of sound, a winged elephant with deadly claws. The Panther fights a losing battle with the creature until Captain America shows up and hits the creature with his mighty shield. The story ends with Jackie and the Thunderbolts riding into New York City with the Sonic Horn mounted on a motorcycle to raid the great city; and the Panther and Cap squaring off against the creature of sound. To Be Continued!

Retrieved from "https://heykidscomics.fandom.com/wiki/Black_Panther_Vol_1_14?oldid=1414827"
Community content is available under CC-BY-SA unless otherwise noted.