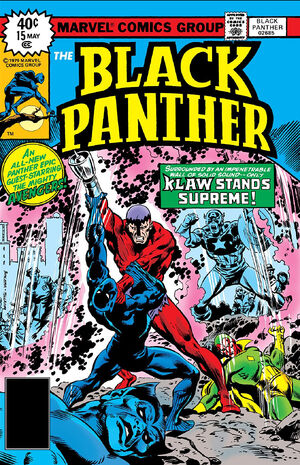 Appearing in "Revenge of the Black Panther!"Edit

Synopsis for "Revenge of the Black Panther!"Edit

Continued from last issue...Cap and Black Panther manage to defeat the winged elephant sound construct and rush to the docks fearing Klaw has a plan to escape his suspended state. At the docks Beast and Vision are attempting to ship Klaw's body to Wakanda when the Thunderbolts show up with Klaw's soni-horn. They make constructs of a rhino and lion to keep the Avengers at bay while they blast Klaw with his horn to revive him. Revived and stronger than ever Klaw battles Vision behind a sound dome the other Avengers can't penetrate. Suddenly N'Yaga and Taku show up in a limo with the Panther's vibranium claws which dampen sound waves and will allow him to fight Klaw one on one. Black Panther rips through the dome and finding Vision defeated attacks Klaw. The dock is blasted in the melee dropping Klaw and Black Panther underwater. The Panther manages to blast Klaw with his own horn causing his body to dissipate. At the Wakandan Embassy Omoro welcomes Monica Lynne and Kevin Trublood while outside Wind Eagle also arrives vowing death to the Panther !

Retrieved from "https://heykidscomics.fandom.com/wiki/Black_Panther_Vol_1_15?oldid=1500733"
Community content is available under CC-BY-SA unless otherwise noted.