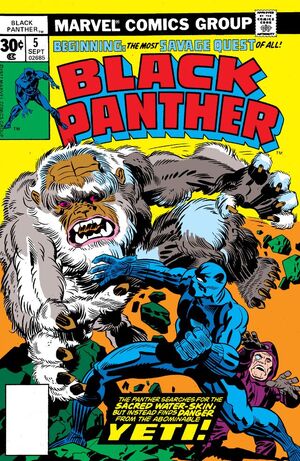 Cold blooded female!! It's your weird band of Collectors who should be kept as curiosities in these tanks! You're no longer human!

Appearing in "Quest for the Sacred Water-Skin!!"Edit

Synopsis for "Quest for the Sacred Water-Skin!!"Edit

They fly a transport craft to a foreign land following the map provided by Princess Zanda. A strange beam of flame erupts from the ground and damages the craft forcing them to land. The Black Panther and Mr. Little jump from the plane into a lake. They emerge and begin scaling the nearby cliffs. A legendary Yeti leaps out from a crag of rocks and attacks them. The two of them race around trying to avoid the monster's blows. The Black Panther erects a rudimentary lever system that launches a heavy rock that smashes the creature in the face, knocking it out.

After defeating the monster, they turn around and find a Samurai Ronin standing before them.

Retrieved from "https://heykidscomics.fandom.com/wiki/Black_Panther_Vol_1_5?oldid=1414818"
Community content is available under CC-BY-SA unless otherwise noted.