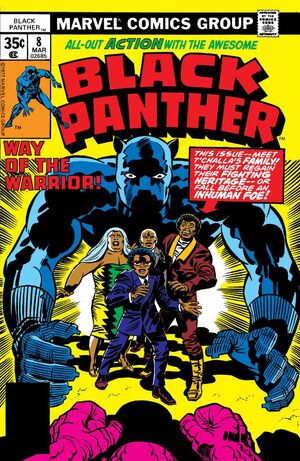 Quake, Wakandas! Tremble humans! The victories I yearned for as a man I shall win tenfold -- in a misshapen form of Destiny's making!

Appearing in "Panthers or Pussycats?"Edit

Synopsis for "Panthers or Pussycats?"Edit

T'Challa is on his way back to Wakanda to stop the revolution perpetuated by his half-brother, Jakarra. Along his flight path, he notices two men swimming away from a capsized boat. He rescues the men and takes them on board. Moments later, he discovers that one of them is Nicky Scarpo, a gangster from the United States. Nicky and his henchman, Herman, attempt to seize control of the Panther's plane, but T'Challa sends it into a tailspin throwing the gangsters off their feet. One of them fires a bullet, which inadvertently ruptures a fuel line. The airplane crashes just off the African coast. Nicky Scarpo is rendered unconscious and his lieutenant dies in the crash. The Black Panther pulls him away from the wreckage.

Meanwhile in Wakanda, Jakarra has mutated into a large, hideous monster as a result of exposure to radiation from the Vibranium mound. He cuts a bloody swathe of destruction until he reaches the royal chambers of Wakanda's presiding government council. T'Challa's family has arrived to lend aid to acting regent, N'Gassi. Jakarra tries to kill them, but the Wakanda security forces arrive and drives him off.

Retrieved from "https://heykidscomics.fandom.com/wiki/Black_Panther_Vol_1_8?oldid=1531703"
Community content is available under CC-BY-SA unless otherwise noted.