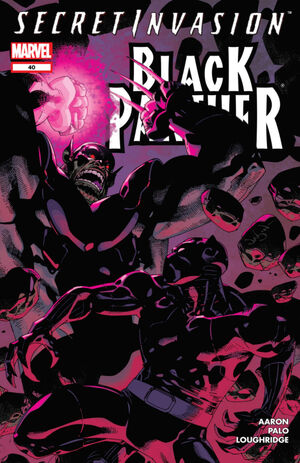 Today we are all the Black Panther! And today we will fight as one! For Wakanda!

As many Wakandan warriors die, T'Challa successfully fights off a very intimidating Super-Skrull, only to be temporarily defeated by two Skrull subversives within his ranks.

Retrieved from "https://heykidscomics.fandom.com/wiki/Black_Panther_Vol_4_40?oldid=1414935"
Community content is available under CC-BY-SA unless otherwise noted.