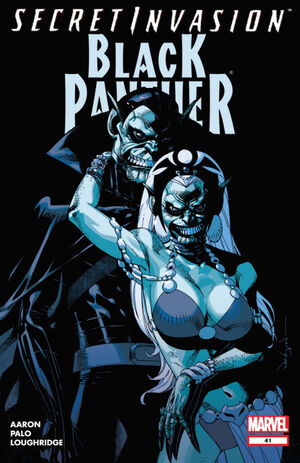 I love it when a plan comes together.

The Skrulls torture a captured Black Panther and Storm, only to figure out they are really the Skrull subversives made to look like the King and Queen, just as the real King and Queen kill Commander K'vvvr, sending the entire ship back to the Skrull homeworld with a message written in blood: "This is what happens when ou invade Wakanda".

Retrieved from "https://heykidscomics.fandom.com/wiki/Black_Panther_Vol_4_41?oldid=1414936"
Community content is available under CC-BY-SA unless otherwise noted.