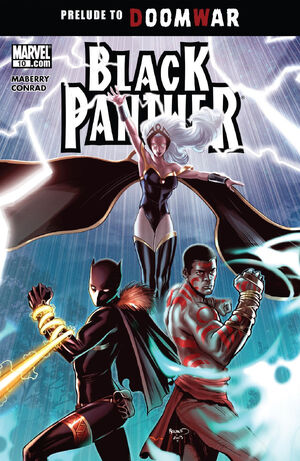 “POWER,” PART 4 Wakanda is under siege on all fronts. Storm brings her weather powers to bear against an unnatural force that threatens to sweep the land with blight and famine…T’Challa takes another step into the dark and destructive world of vengeance…and the new Black Panther prepares for a showdown with the last person linked to the assassination attempt on her brother: Prince Namor.

Retrieved from "https://heykidscomics.fandom.com/wiki/Black_Panther_Vol_5_10?oldid=1414946"
Community content is available under CC-BY-SA unless otherwise noted.