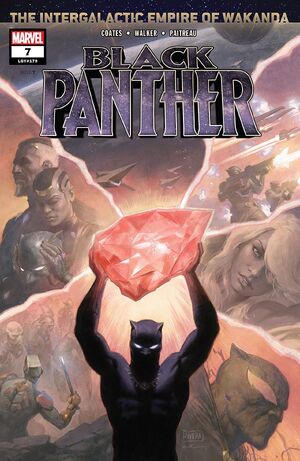 I would advise waiting. Just a little longer.

THE NEXT CHAPTER OF THE INTERGALACTIC EMPIRE OF WAKANDA STARTS HERE!

“THE GATHERING OF MY NAME”

The Maroons strike back! You watched them steal the M’Kraan Shard from the empire. Now, at last, the rebels are ready to show the empire who they really are. “He Who Put the Blade Where It Belonged” retakes his rightful title—and the Black Panther is reborn!

Retrieved from "https://heykidscomics.fandom.com/wiki/Black_Panther_Vol_7_7?oldid=1662122"
Community content is available under CC-BY-SA unless otherwise noted.