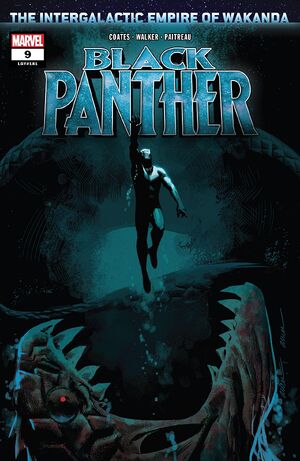 That spear you hold... it was made to be wielded by a king. Are you a king?

Appearing in "Book 2: The Gathering of My Name"Edit

“THE INTERGALACTIC EMPIRE OF WAKANDA: THE GATHERING OF MY NAME” Part 3

The Panther faces a creature of nightmares! In the fight against N’Jadaka and his empire, the Maroons embark on a journey through myth. But the loss of their leader N’Yami continues to haunt them. And the true monster lies in wait.

Retrieved from "https://heykidscomics.fandom.com/wiki/Black_Panther_Vol_7_9?oldid=1676709"
Community content is available under CC-BY-SA unless otherwise noted.