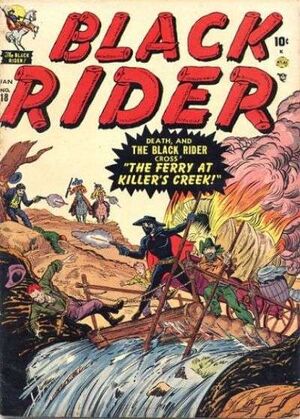 Appearing in "The Indian With Two Hearts!"Edit

Synopsis for "The Indian With Two Hearts!"Edit

Fort Nobel, Montana: Dick Fenshaw arrives at the fort and meets with Major Denning about rumors of a Blackfoot attack may be mounting on the fort. Confirming the reports from a half-white, half-Blackfoot man named Jim Thunderhead. However, despite this confirmation, the soldiers do not trust Thunderhead due to his mixed race. Furious that he still cannot be trusted after years of faithful service to the fort, Jim storms off intent on joining the Blackfoot tribe and giving them his loyalty instead. As he leaves, Major Denning orders the base to prepare for attack.

Meanwhile at the Blackfoot village, Matthew Masters has completed a delicate surgery on the wife of chief Grey Rock. After thanking Masters for his help, Grey Rock tells him that they intend to fight settlers that are encroaching on their land and starving his people, and so in order to protect what is theirs they have decided to go to war. Masters warns Grey Rock that nothing can be accomplished with war and presses him to strive to make peace. Grey Rock still believes that war is the best option and then has his warriors escort Matthew out of their lands.

When parting company with his escort one of the warriors warn him to stay away from Fort Nobel, telling him that there is danger both in and out of the fort. suspecting that there is a spy among the fort, Masters changes into the Black Rider in order to thwart a conflict. He rides toward the base and encounters a Blackfoot war party and is forced to confront them. Meanwhile, elsewhere Jim Thunderhead has informed a nearby patrol of soldiers that the woods are full of Blackfeet. They unaware that Thunderhead is trying to fool them into a battle. They ride right into a slaughter just as the Black Rider fights his way through. The Rider holds off the Blackfeet long enough for him and the soldiers to escape back for Fort Noble.

The Black Rider changes back into his alter-ego of Matthew Masters and meets with Grey Rock and is allowed passage into the village. Along the way to see Grey Rock he spots that John Thunderhead has been tied to a tree and left to die of exposure. Masters slips away and changes into the Black Rider again and goes to free Thunderhead. He then gets Thunderhead to assist him in stopping the impending battle. To this end they go up to the cliff along the path between the fort and the Blackfoot camp. The pair set up a means to cause snow to fall and block the path so that the war is held off.

When the Blackfoot army tries to pass through the ridge, they cause snow to fall and block it. The Black Rider then warns Grey Rock that if he continues the attack that he will bury them all in snow. Grey Rock agrees to stop the fight. Having been rejected by both of his heritages and guilt ridden for almost causing a war, Jim then jumps off a cliff committing suicide. With Jim's death, both sides realize the need to foster peace and an agreement between the Blackfoot and the soldiers is made. They erect a statue of Jim Thunderhead in commemoration of the man who brought them together.

September 1875: Matthew Masters rides into the town of Locust Glen spotting a poster advertising an upcoming Shakespearean play. As he enters town he spots a number of men attacking a young boy accused of handing out counterfeit money. When being informed of what is happening he is introduced to Horace Hanslow, the actor who is putting on the Shakespearean play. With the people about to string up the accused counterfeiter, Masters slips away and changes into the Black Rider. The Rider shoots the noose off the man, named Jones, before he can be hung and reminds the locals that Jones is entitled to a fair trial and turns him over to the sheriff. Overhearing the commotion is Hanslow who muses that Jones will need a lawyer.

Meanwhile, in the sheriffs office, the Black Rider is shown a map of where the counterfeit money has been passed through the area and that it is along the same route that Jones has traveled. One of the deputies puts Jones in a bed as he is passed out and they decide that he needs to see a doctor. The Black Rider says he'll get one and slips away to change back into Matthew Masters. Jones has revived before Masters returns to treat him. He tries to get Jones to talk, but he refuses to speak. Suddenly a lawyer calling himself T.V. Ambros arrives to represent Jones in his upcoming trial. Masters leaves as there is nothing more than he can do.

Left alone with Jones, Ambros informs him that he will die, pulling out a bottle of poison. As Masters rides out of town he passes another poster for Horace Hanslow's show and notices that Hanslow and Ambros have an identical mole on their face. Masters changes back into the Black Rider and races back to town just in time to stop Jones from drinking the poison. The Rider then goes to the theater where he attacks Hanslow's stage hands and investigates his wagons and finds all the counterfeit money. He then learns that the entire troupe was being forced to keep Harlow's secret. The Black Rider then confronts Harlow and his gang and guns them down.

Appearing in "The Fork in the Road!"Edit

Synopsis for "The Fork in the Road!"Edit

Appearing in "The Ferry at Killer's Creek!"Edit

Synopsis for "The Ferry at Killer's Creek!"Edit

Wyoming: Near the Flat River, a man named Harlan Beckwith orders a band of outlaws to attack a passing stagecoach as they head toward the river ferry. At the ferry with the Black Rider who hears the shots and goes to the aid of the stagecoach. He sends the outlaws fleeing and saves the life of Harlan's estranged wife and her travelling companion Zeb Reiger. They explain that Harlan has been trying to kill her since she left him and the pair have been on the run together to find a new life elsewhere. Mrs. Amanda Beckwith explains that her husband does not love her but cannot bare to part with any possession and would sooner kill his wife and their two children than have her go to another man.

After explanations are made, the Black Rider parts company while Backwith and Zeb take ferry onward to Flat City, unaware that the Black Rider -- in his alter-ego of Matthew Masters is keeping an eye on them. Meanwhile, Harlan Beckwith still has not given up on murdering his wife and continues after her. While in Flat City, Zeb reveals that he is in love with Mrs. Beckwith and he sends her on to safety with her children at his cabin. Zeb then stays in town and tries to eek out a living working at the saloon.

Soon after, Harlan's lawyer confronts Zeb over the whereabouts of Mrs. Beckwith. When Zeb refuses to reveal the location of his client's wife, Masters gets in the way when the lawyer tries to shoot Zeb and sends him running. Masters then slips away and changes into the Black Rider and follows Zeb to his cabin. There he finds that the lawyer has located them as well and has come to tell them that they can buy off Harlan so that he leaves them alone. Zeb and Amanda agree to go along and when they take the ferry back they are attacked by Harlan's hired guns. But before they can slay the couple, the Black Rider arrive and guns them down. Confronting Harlan, he fatally shoots him. Dying, Harlan reveals that he had learned that Amanda's uncle in Boston had died, leaving her a fortune and that he kept that fact from her and sought to kill her in order to inherit the fortune for himself. In the aftermath, Amanda -- now a heiress -- and Zeb decide to get married.

Retrieved from "https://heykidscomics.fandom.com/wiki/Black_Rider_Vol_1_18?oldid=1406561"
Community content is available under CC-BY-SA unless otherwise noted.