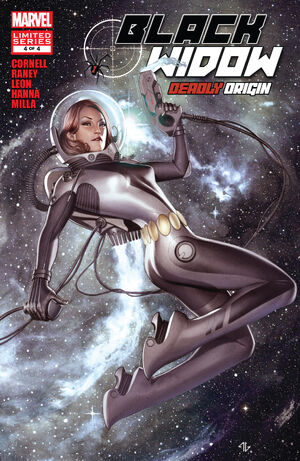 Vodka. Of course there is. To Ivan Petrovich Bezukjhov... as promised -- a toast. And that's all.

Natasha Romanoff’s search for the truth behind the Icepick Protocols has taken her around the globe—and now she rockets straight into outer space! It’s over the top action all the way—featuring the other Black Widow and two Captain Americas—as Marvel’s deadliest beauty finally uncovers which part of her past has come back to bite her!

Retrieved from "https://heykidscomics.fandom.com/wiki/Black_Widow:_Deadly_Origin_Vol_1_4?oldid=1415076"
Community content is available under CC-BY-SA unless otherwise noted.