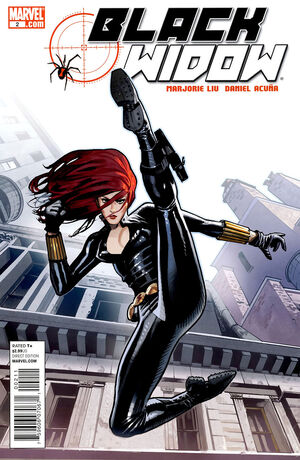 Appearing in "The Name of the Rose, Part Two"Edit

THE HEROIC AGE IS HERE! The deadliest hero from IRON MAN 2, INVINCIBLE IRON MAN and CAPTAIN AMERICA fights for her life! Somebody wants the super-spy codenamed the Black Widow dead…and they came damn close! Now Natasha Romanoff, recovering and angry, chases the trail with fatal skill! What do her friends Iron Man, Wolverine and Daredevil know about her would-be killer…and why won’t they help her?!

Retrieved from "https://heykidscomics.fandom.com/wiki/Black_Widow_Vol_4_2?oldid=1657703"
Community content is available under CC-BY-SA unless otherwise noted.