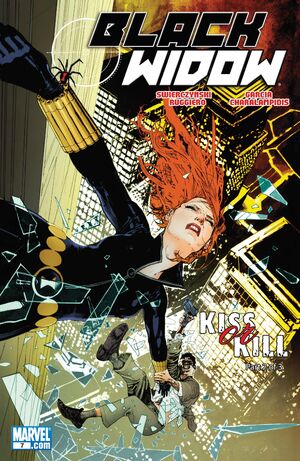 “KISS OR KILL,” PART 2 Your name is Nick Crane. You’re a young journalist whose senator father was seduced and murdered by a sexy Soviet agent who calls herself “Black Widow.” Now she’s abducted you and handcuffed you to a bed in a swank hotel penthouse. Now she’s leaning over your prone body, whispering softly in your ear: I’m here to save you. Every cell in your body wants to kill her... but at the same time, part of you wants to kiss her. Very, very badly. Fortunately, that’s a decision you won’t have to make right now. Not with a pair of violent super-powered assassins smashing through the hotel windows... Duane Swierczynski and Manuel Garcia’s new era for the super-spy Avenger known as Black Widow continues here!

Retrieved from "https://heykidscomics.fandom.com/wiki/Black_Widow_Vol_4_7?oldid=1415054"
Community content is available under CC-BY-SA unless otherwise noted.