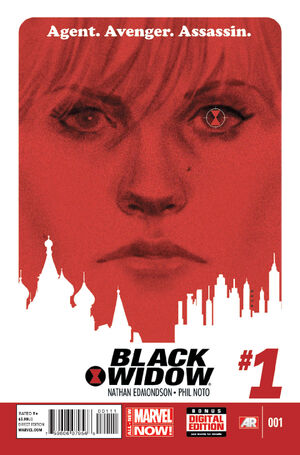 How many more jobs... How long will it take... I don't know if I can do it... Even if I could forgive myself... This is what I am now. And you'll never know who I was before.

You’ve seen Black Widow as an Avenger and even an Agent of Shield. But on her own time she searches for atonement for her past as a KGB assassin—in ways of which those teams just wouldn’t approve. From the darkest corners of the Marvel Universe, Nathan Edmonson (Who is Jake Ellis?) and Phil Noto (Thunderbolts, X-23) bring you a new ongoing series as gorgeous and mysterious as Nastasha Romanov herself!

Retrieved from "https://heykidscomics.fandom.com/wiki/Black_Widow_Vol_5_1?oldid=1415056"
Community content is available under CC-BY-SA unless otherwise noted.