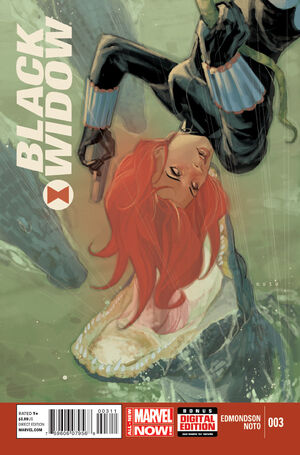 One with the enviroment. -- One of the most valuable skills in espionage. You can gear up with the best swag out there-- Put on camo, tech, weaponry... But it is the unteachable skill to belong anywhere. The other edge of what is the unfortunate truth: You must first belong nowhere.

• She's the kind of woman you call when you need to escape from a South American prison.

• Don't miss the book everyone is talking about (and it isn't even out yet!)

Retrieved from "https://heykidscomics.fandom.com/wiki/Black_Widow_Vol_5_3?oldid=1415058"
Community content is available under CC-BY-SA unless otherwise noted.