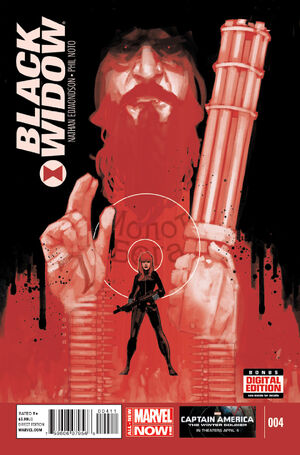 • From the cold streets of old Russia, the Hand of God reaches out to crush Black Widow—and it is merciless.

• Outmatched by the brute force of a powerful new villain, Natasha finds a deadly plot unfolding that spans the entire globe

• Jump on to the sensational new series as the most lethal The Avenger faces her deadliest test!

Retrieved from "https://heykidscomics.fandom.com/wiki/Black_Widow_Vol_5_4?oldid=1415059"
Community content is available under CC-BY-SA unless otherwise noted.