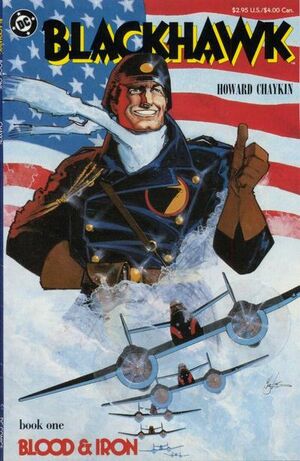 United States senator Shadrack Hightower publicly accuses famed aviator Janos "Blackhawk" Prohaska of having ties to the Communist party in Russia and inwardly promoting the overthrow of the United States government. He cites Prohaska's prior affiliation with "Bolshevik" Bill Heywood during the bombing of Guernica in 1936. At a senate hearing, Prohaska denies having any association with those who would commit acts of sedition against the U.S.

Meanwhile, two Jewish mobsters hijack a military vehicle carrying a top secret government weapon. They shoot the two army personnel and don their uniforms before taking their cargo to a secret location. The two gangsters are in the employ of mob boss Emil Bronksi.

At night, Janos has a disturbing nightmare in which he sees himself in the company of a giant black hawk. The hawk is locked in combat with a lion, and as the scene changes, he sees an image of a sneering Senator Hightower wearing the vestments of a decorated Nazi officer. Prohaska awakens to a telephone call from his fellow aviator Chuck Sirianni. Chuck arranges a meeting with the other Blackhawk Squadron members and Janos tells him that he will be there soon. Next to him in the bed is Reba MacMahon – a seductress who makes a habit of assuming different names. Janos excuses himself and goes off to meet the others.

The following day, British Lord-turned-Nazi Marshall Death Mayhew goes hunting with his Russian ally Fyodor Vlaslov. Fyodor tells Death of his intricate means of manipulating Emil Bronski into procuring the secret weapon for them – an atomic bomb. Bronski doesn't yet know that the men who are paying him for this deed are actually members of the Nazi party. Death Mayhew also tells Fyodor that he is establishing his own counterparts to the Blackhawks known as the White Lions.

When Janos meets with Chuck, he learns that Sirianni is actually working on behalf of the O.S.S. and he wants to pull the Blackhawsk together again to retrieve the missing bomb. Prohaska is furious; notably because the government that is now enlisting his aid is the same one that is also calling him a Communist sympathizer. Chuck and fellow Blackhawk Weng "Chop-Chop" Chan tell Janos that they are to go to Morocco to find the bomb, at which point, Jan is to meet with an undercover Soviet contact.

Prohaska arrives in the Middle East where he meets Natalia Gurdin-Reed, an American agent who has been living in Moscow for the past two years.

At a nearby hotel, Reba MacMahon arrives where she meets with Emil Bronski. Bronski speaks with his henchman Shlomo and is now aware that the Nazis are the one who hired him to steal the bomb. Bronski does not intend to deliver the bomb to Hitler, and has hidden it within the trunk of an unmarked roadster. He is willing to sell it to anyone who will personally use it against Hitler himself.

The situation heats up as Death Mayhew arrives. He bursts into Bronski’s hotel room, and Reba races downstairs as bullets begin to fly. Janos and Natalie are on the street when they hear the sounds of gunfire. Mayhew emerges from the front of the building, punches Janos, then takes off.

Janos and Natalia Reed go to a hangar, where Natalia has a custom-made Grumman XF5F ready and waiting. They take off out of the hangar and attempt to track Mayhew down, but they are too late. Mayhew is gone.

The atomic bomb however, is actually in the trunk of a different vehicle. An Arab steals the car and sells it to a black market smuggler.