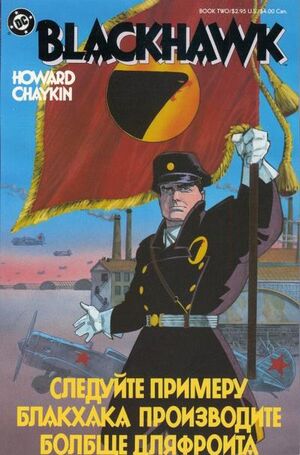 I didn't build these planes so you could run off and get all the glory -- I'm coming with you -- I'm Lady Blackhawk -- case closed...

The elusive atomic bomb is smuggled inside of a roadster and sold to a German pirate freighter captain. Meanwhile, stories of Death Mayhew's new White Lions fighter squadron hits the news wire, and photographs circulate of his pilots flying sorties over Bolshevik territories in Russia.

The O.S.S. have the Blackhawks infiltrate a Luftwaffe air field and commander their dive bombers. They then drop propaganda leaflets across Europe calling for Germany to surrender. Janos in particular is uptight with the mission, and is eager to do more than simply function as a tool of the O.S.S.

Death Mayhew meanwhile, confers with his private physician and discovers the truth about something he has suspected for some time – he is dying from a terminal illness and only has a few months to live. He decides to step up his personal time table, and bemusedly declares that if he is to die, he is going to set off a memorable funeral pyre.

The German Captain goes to France with his newly purchased roadster. Mayhew's thugs intercept him and shoot him in the head. Once again, Death has his hands on his highly coveted weapon.

Leaving the doctor's office, Mayhew meets up with his American contact Senator Hightower. Hightower is facilitating Mayhew's schemes, but is unclear as to what Death intends on using the atomic weapon for. He is also concerned about Death's most recent paramour, Reba MacMahon. Death tells him that he has nothing to fear from her. At this time, Reba begins to grow suspicious of Mayhew's actions, and tries to find Janos.

Janos meanwhile, is at the British embassy voicing his dissatisfaction over his recent missions. He wants to take the fight directly to his enemies. Natalie Reed arrives, and the two begin bickering over Janos' apparent disrespect for the British ambassador.

Some time later, a function is held at Natalie's place of employment – the Valentine-Prendergast Airplane Factory. The Blackhawks broadcast Natalie’s tour of the facility to distinguished personnel over Janos' custom designed television transmitter. Natalie shows off Valentine-Prendergast's upgrade of the Grumman XF5F Skyrocket. Suddenly, Death Mayhew's White Lions appear in the sky above the factory and open fire. Witnessing the attack on television, the Blackhawks scramble to their planes to face them. During the ensuing conflict, Stanislaus' plane fails to throttle correctly, and his Skyrocket explodes just outside the hangar, killing him. The other Blackhawks manage to drive the White Lions away.

News of their failure reaches the ears of Death Mayhew, and he is not amused. He consults with his Russian ally Fyodor Vlaslav.

Retrieved from "https://heykidscomics.fandom.com/wiki/Blackhawk_Vol_2_2?oldid=1431010"
Community content is available under CC-BY-SA unless otherwise noted.