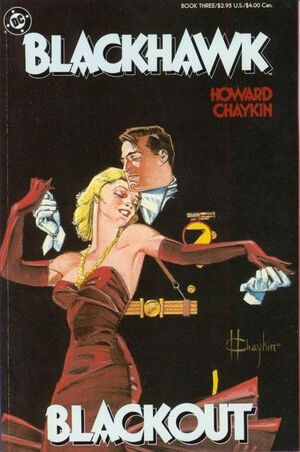 Next time I get caught out of favor with the American people, let's keep the big guys out of it -- and let me take my case to the average guy -- because I know I can count on a fair shake from him.

Three members of the White Lions go to France where they infiltrate a Nazi stronghold dressed as German officers. After killing several soldiers, they acquire the elusive atomic weapon and place it on board a truck.

In England, Janos and Natalie attend a black tie function at the British embassy. Janos meets Laurette Honneichker, an old friend of Stanislaus Drozdowski. Callously dismissing Drozdowski's recent demise, she makes a play for Jan, but Prohaska walks away from her in disgust. Natalie isn't faring much better as she finds herself the victim of fashion designers who attempt to create a new look for her. When Natalie meets back up with Jan, they watch a televised broadcast of Senator Hightower decrying Prohaska's actions, and accusing him of ties to communism.

In New York, Hightower concludes his transmission and takes a cab to a movie theater in Times Square. There, he finds Death Mayhew in the front row of the theater watching one of his old movies. Hightower criticizes him for being out in the open, but Mayhew dismisses him. Death tells the senator that Fyodor Vlaslov was found dead outside of the Kremlin. As the film concludes, the two men retire to Mayhew's New York suite at the Waldorf-Astoria. In the room, Reba MacMahon is stumbling about in a severe state of inebriation. She gets into a fight with Mayhew and he begins slapping her around. After locking her inside the bedroom, he comes back out and tells Hightower that he is terminally ill. Worse, he has less than twenty-four hours to live. He tells him that his agents have the bomb and will be deploying it in New York City. Hightower thinks Mayhew is insane, particularly after the British turncoat requests the erection of a memorial in his honor at the sight of the Empire State Building – the projected ground zero for the attack.

In Paris, the Russian agents smuggle the atomic bomb onto the New York Bomber, and begin the long flight to Manhattan. The bomb is to be detonated by radio signals broadcast over a specific frequency. Death Mayhew is the only one who knows which frequency is required to activate the device.

Back in New York, Reba eventually soberly emerges from her room. Death and Hightower are long since gone. She finds Mayhew's outline of the attack on the floor and realizes that he intends on destroying the entire city. In a panic, Reba leaves the hotel room in search of Janos. She eventually finds him and tells him of the attack.

Janos and Natalie burst into action, and they borrow a policeman's horse to get to the Empire State Building. Janos squares off against Death Mayhew and succeeds in gunning him down with Mayhew's own weapon. He then uses his knowledge of television mechanics to find the proper frequency that will activate the bomb. He detonates it on board the plane before it reaches Manhattan. There is a huge explosion out at sea.

Days after the near disaster, news of Senator Hightower's connections to the Reich become known. The Senator is found dead in his car. In light of this, Janos suddenly gains favor in the public eye again. President Roosevelt personally comes to New York City and congratulates Prohaska for his bravery. Janos makes an impassioned speech before the public, thanking them for their gratitude.

Retrieved from "https://heykidscomics.fandom.com/wiki/Blackhawk_Vol_2_3?oldid=1431011"
Community content is available under CC-BY-SA unless otherwise noted.