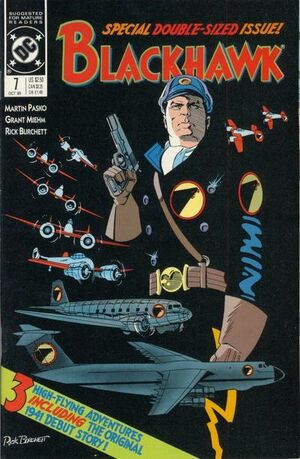 Synopsis for "The Origin of Blackhawk"Edit

Poland 1939 - Germany invades and Captain Von Tepp leads his famous "Butcher Squadron" against the greatly outnumbered Polish air force. The Poles fight valiantly but are shot from the sky until only one jet-black plane remains. Finally, the lone flyer is overwhelmed and crashes in a "pancake" landing. He runs for a nearby farmhouse but Von Tepp dives and drops a bomb on it. The flyer rushes in and calles for Jack and Connie, his brother and sister. Connie was killed instantly and Jack soon dies, too. Before he goes, Jack asks his brother to "get him for us, brother, make him pay." Months pass and a squadron led by the mysterious "Blackhawk" has the Nazis scared. And the one question Blackhawk always asks is where is Von Tepp. Von Tepp hears of this and lays a trap with a pretty American nurse as bait. Blackhawk and his men spring the trap and turn the tables on the Germans. They take them and the nurse to Blackhawk Island where Blackhawk and Von Tepp fight an aerial duel. Naturally, Blackhawk triumphs and gains vengeance for his brother and sister.

Retrieved from "https://heykidscomics.fandom.com/wiki/Blackhawk_Vol_3_7?oldid=1431018"
Community content is available under CC-BY-SA unless otherwise noted.