The Great Leap Forward is a Blackhawks storyline published as part of The New 52. Following the timeline reboot during Flashpoint, it establishes the team's continuity in the DCnU. The series was written by Mike Costa with art by Ken Lashley, [ 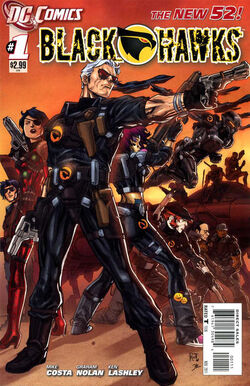 The Great Leap Forward is a Blackhawks storyline published as part of The New 52. Following the timeline reboot during Flashpoint, it establishes the team's continuity in the DCnU. The series was written by Mike Costa with art by Ken Lashley, Graham Nolan and Cafu. Due to low interest and sales, the series was cancelled midway through the first arc but allowed to finish its initial storyline.

They completely reboot the Blackhawk Squadron, originally a team of fighter pilots active during World War II. Instead they are presented as a black-ops commando team in the modern day. This appears to have retconned the original team out of existence, although it is unclear at the time of publication.

The Blackhawk Program are introduced as an elite top-secret military unit sanctioned by the United Nations. Atilla, the Irishman, Kunoichi and Lady Blackhawk fight a group of terrorists at an airport and take them down successfully; someone snaps a picture of the team on his iPhone. The United Nations sends a delegate named Schmidt to warn them of this security breach. Canada takes him on a tour of the Eyrie and he meets their leader Andrew Lincoln, who has grown paranoid about microscopic weapons. It's revealed that the terrorists were employed by a villain named Mother Machine and she blows up their prison using nanocites in their blood. In bed with her teammate Wildman, Kunoichi begins smoldering and realizes that she contracted nanocites from a bite by one of the terrorists.[1] The Blackhawks investigate the destroyed prison, and they're attacked by an enhanced agent of Mother Machine named Titus. Kunoichi is able to defeat him because she is also enhanced by nanocites, and they interrogate him while quarantining Kunoichi. Canada and Wildman are captured, then taken back to Mother Machine's lair.[2] Schmidt asks to be reassigned permanently to the Blackhawks. Titus breaks out of his imprisonment and breaks into the Eyrie's nuclear core. Mother Machine takes Canada and Wildman into her city Bespoke, explaining her technological advancements and inviting them to join her people.[3] Kunoichi is sent to take down Titus while they evacuate the Eyrie, and she kills him before the whole place explodes. Canada bashes Mother Machine over the head when she drops her guard, and escapes with Wildman piloting a shuttle into space.[4] They're stranded on an orbiting satellite, and Mother Machine gives them the choice to join her or die. Wildman realizes the satellite is a weapon, and uses it to completely obliterate Bespoke. Attila and Lady Blackhawk hold a daring extraction at 500mph to rescue Wildman and Canada from the satellite plummeting at terminal velocity. In the hospital Kunoichi wakes up when Mother Machine begins downloading into her mind using the nanocites.[5] Schmidt takes the Blackhawks public in a press conference, although Lincoln maintains secrets even from the United Nations. Attila and Irish go on a mission in Estonia to beat information out of more suspected terrorists. During a routine press photo opportunity at the Eyrie, they detect surveillance equipment and take fake journalists in for questioning. It's revealed to have been part of their plan, and the inner sanctum explodes when information is uploaded.[6] Wildman dies in the explosion and Kunoichi is devastated. They track down the terrorist responsible in Finland, a man who calls himself Steig Hammer. Lincoln personally leads the team to attack his base without U.N. approval and Hammer reveals that he's the man who designed most of their equipment. He begins taking control of Kunoichi's nanocites, but Canada kamikazes his plane into the building and kicks the shit out of him. This rescues Kunoichi, but Mother Machine has finally grown strong enough to possess her body.[7] Mother Machine finally emerges when Kunoichi is taken back to the Eyrie, and jumps into their technology where she can infect the entire world with her presence. Kunoichi battles Mother Machine inside her own mind, with help from Wildman who has survived as a nanocite date signature. They distract her long enough for the team to escape and nuke the Eyrie, hopefully finishing Mother Machine once and for all. The team recuperates on a nearby mountain-top and acknowledge that the Blackhawks are over, since they've destroyed two billion euros worth of equipment and lost their charter. Despite this, they are hopeful that they'll be able to get back on their feet and continue the good fight.[8]

Retrieved from "https://heykidscomics.fandom.com/wiki/Blackhawks:_The_Great_Leap_Forward?oldid=1501315"
Community content is available under CC-BY-SA unless otherwise noted.