View source
Part of the 'The New 52' event 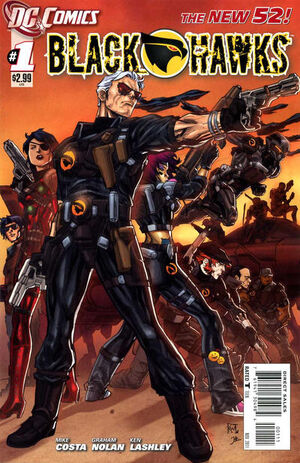 There better not be any nanocites in me...

In Ayaguz, Kazakhstan, a BlackHawk Insertion team was supposed to remain covert as they monitored a hostage crisis taking place at the Inernational Airport. It quickly deteriorated into a running battle with operatives Attila, Canada, Kunoichi, and Lady Blackhawk III fighting the terrorists and rescuing the hostages. But Kunoichi is revealed as a BlackHawk's agent during the battle, upsetting the secrecy of the BlackHawk's organization. Delegate Schmidt is dispatched afterwards by the United Nations to speak with the group's leader, Col. Andrew Lincoln. The imprisoned terrorists explode unwillingly, as a new player, Mother Machine ties up lose ends. Meanwhile, Kunochi realizes she has probably been infected with nannites in her fight with the terrorists.

Between us and them stand the Blackhawks, an elite force of military specialists equipped with the latest in cutting-edge hardware and vehicles. Their mission: Kill the bad guys before they kill us.