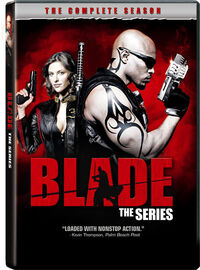 Blade: The Series is an American live-action television series that takes place right after the events in Blade: Trinity which follows the vampire-hunter Blade in Detroit. This spin-off series only lasted twelve episodes before it was cancelled. Actor Kirk "Sticky" Jones replaced Wesley Snipes for the title role of Blade. Critical reaction to this series were generally mixed as it earned a Metascore of 49/100 on Metacritic.[1]

Retrieved from "https://heykidscomics.fandom.com/wiki/Blade:_The_Series?oldid=1580519"
Community content is available under CC-BY-SA unless otherwise noted.