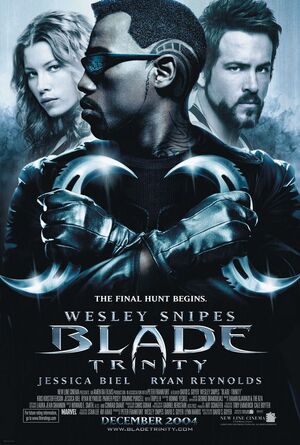 The vampires succeed in framing Blade for the killing of several humans (who were in fact familiars being used as bait). Blade, now in the public's eye and wanted by the FBI, has to join forces with the Nightstalkers, a human clan of vampire hunters. Blade, Hannibal King, and Abigail Whistler go after Danica Talos, who has succeeded in locating and resurrecting Drake, also known as Dracula, the first vampire and by far the most powerful. In order to stop him, Blade has to release a virus named the daystar that will wipe out all vampires, but he has only one opportunity to do so. In a desperate struggle with Drake, Blade triggers the virus, and as a final gift to his honored enemy, Drake uses a unique ability of his to transform his body into Blade's physical double, allowing Blade to go on and live his life with the FBI believing that Blade himself is dead.

Blade: Trinity is a 2004 film, written & directed by David S. Goyer, who also wrote the screenplays of the first two Blade movies. It is the third film in the Blade trilogy, following on from Blade and Blade II, and it is based on Blade, and played by Wesley Snipes. The title alludes to the trinity formed between Blade, Hannibal King, and Abigail Whistler in the movie.

It was originally expected that Guillermo del Toro, who directed Blade II, would direct. He passed on the project, however, to work on his "dream project" Hellboy.

The music score is composed by Ramin Djawadi and RZA. The soundtrack is on New Line Records.

Retrieved from "https://heykidscomics.fandom.com/wiki/Blade:_Trinity?oldid=1580522"
Community content is available under CC-BY-SA unless otherwise noted.