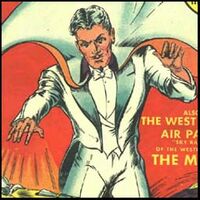 It was a real pleasure for both of us to work for our country!

Blane Whitney began showing signs of mental wizardry as a child. He used his powers to fight foreign menaces during WWII, but for reasons never explained, he became a villain much later in life.

In his earlier career, he took down several spy rings, including the Mosconian Spies. During at which time he met, and fought alongside, his best friend the Shield.

He also met a 12-year old boy who witnessed a gang shooting and fought off one of the gunmen. When the Wizard intervened, he took the orphaned boy under his care. Both teamed up to fight crime and the boy would become his sidekick — Roy, the (original) Super Boy.