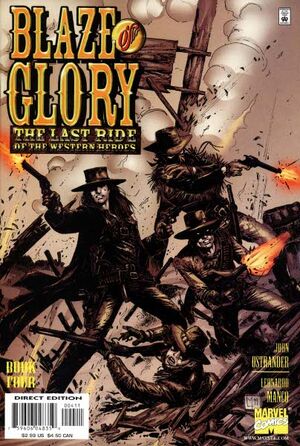 Men Die. Every single one of us. That's a fact and that's our fate.

After escaping the Nightriders, Gunhawk and Caleb Hammer make their way to Wonderment. Once there, however, all men agree to work together until their common enemy is taken care of. Clay Riley receives word that his old nemesis, the Ghost Rider, has come to the defence of Wonderment as well. This prompts him to spend the last of his money on a hundred more riders, as well as to lead the men himself.

The heroes approach Marcel Fournier, having discovered that he was in fact a spy for Riley's camp all along. Before anyone can react, Fournier grabs Jone's boy, Cass, as a hostage and attempts to flee town. The Two-Gun Kid is forced to gun down his old friend. Later, the Rawhide Kid and Red Wolf come to an agreement whereby the native tribes pledge their support in the upcoming battle.

That night, the Nightriders come like a force from hell, but the heroes meet them head on, killing them by the dozons. The Outlaw Kid loses his mask during the fray, reverting in mind to the mild-mannered Lance Temple, and is quickly gunned down. Before he dies, he lights the fuse to a stick of dynamite, taking several men with him. The Ghost Rider guns down Clay Riley, who is transfixed by the site of his old enemy, but is wounded by Kid Cassidy. The Ghost Rider removes his mask, to show that he is actually Reno Jones left facing his old friend. Jones ends up strangling Cassidy to death with his bare hands.

Shortly afterwards, Red Wolf leads the native tribes into town, decimating the already scattered Nightriders. Just as it looks like the bloodshed is about to end, Gunhawk shoots Kid Colt in the back in order to collect his bounty. Caleb Hammer, despite his own misdealings with Colt, he felt he deserved better than to be gunned in the back, he then shoots the Gunhawk down dead. After the battle is over, the Two-Gun Kid is also shown to have fallen. The Rawhide Kid is left the task of burying his friends and then departs town with Hammer. Red Wolf decides to find a little peace with Ghost Wind Rider and Reno Jones gives the Ghost Rider costume back to Flaming Star from whence it came.

Retrieved from "https://heykidscomics.fandom.com/wiki/Blaze_of_Glory_Vol_1_4?oldid=1415116"
Community content is available under CC-BY-SA unless otherwise noted.