Blondie is an American comic strip created by cartoonist Chic Young. Distributed by King Features Syndicate, the strip has been published in newspapers since September 8, 1930.[1] The success of the strip, which features a well-endowed blonde and her sandwich-loving husband, led to the long-running Blondie film series (1938–1950) and the popular Blondie radio program (1939–1950).

Chic Young drew Blondie until his death in 1973, when creative control passed to his son Dean Young, who continues to write the strip. Young has collaborated with a number of artists on Blondie, including Jim Raymond, Mike Gersher, Stan Drake, Denis Lebrun, and John Marshall. Through these changes, Blondie has remained popular, appearing in more than 2,000 newspapers in 47 countries and has been translated into 35 languages. Since 2006, Blondie has also been available via email through King Features' DailyINK service.[2]

Originally designed to follow in the footsteps of Young's earlier "pretty girl" creations Beautiful Bab and Dumb Dora, Blondie focused on the adventures of Blondie Boopadoop—a carefree flapper girl who spent her days in dance halls. The name "Boopadoop" derives from the flapper Catchphrase popularized by Helen Kane in the 1928 song "I Wanna Be Loved by You" (with its tag line, "boop-boop-a-doop") and which was referenced for the flapper cartoon character named Betty Boop, who first appeared in 1930 and was seen in her own King Features comic strip, drawn by Bud Counihan from 1934 to 1937.

On February 17, 1933, after much fanfare and build-up, Blondie Boopadoop marries her boyfriend Dagwood Bumstead, the son of a wealthy industrialist. The marriage was a significant media event, given the comic strip's popularity.[3] Unfortunately, Dagwood's upper-crust parents strongly disapprove of his marrying beneath his class, and disinherit him. The check Dagwood uses to pay for his honeymoon bounces, and the Bumsteads are forced to become a middle-class suburban family. The catalog for the University of Florida's 2005 exhibition, "75 Years of Blondie, 1930–2005", notes:

Blondie's marriage marked the beginning of a change in her personality. From that point forward, she gradually assumed her position as the sensible head of the Bumstead household. And Dagwood, who previously had been cast in the role of straight man to Blondie's comic antics, took over as the comic strip's clown.[4]

"Dagwood Bumstead and family, including Daisy and the pups, live in the suburbs of Joplin, Missouri," according to the August 1946 issue of The Joplin Globe, citing Chic Young.[5]

The Bumstead family has grown, with the addition of a son named Alexander (originally "Baby Dumpling") on April 15, 1934, a daughter named Cookie on April 11, 1941, a dog, Daisy, and her litter of five unnamed pups. In the 1960s, Cookie and Alexander grew into teenagers (who uncannily resemble their parents), but they stopped growing during the 1960s when Young realized that they had to remain teenagers to maintain the family situation structured into the strip for so many decades.

Dagwood slaves away at the office of the J. C. Dithers Construction Company under his dictatorial boss—Julius Caesar Dithers. Mr. Dithers is a "sawed-off, tin pot Napoleon" who is always abusing his employees, both verbally and physically. He frequently threatens to fire Dagwood when Dagwood inevitably botches or does not finish his work, sleeps on the job, comes in late, or pesters Dithers for a raise. Dithers characteristically responds by kicking Dagwood theatrically, and ordering him back to work. The tyrannical Dithers is lord and master over all he surveys, with one notable exception—his formidable and domineering wife, Cora.

Blondie and Dagwood's best friends are their next-door neighbors Herb and Tootsie Woodley, although Dagwood and Herb's friendship is frequently volatile. Lou is the burly, tattooed owner of Lou's Diner, the less-than-five-star establishment where Dagwood often eats during his lunch hour. Other regular supporting characters include the long-suffering mailman, Mr. Beasley; Elmo Tuttle, a pesky neighborhood kid who often asks Dagwood to play; and a never-ending parade of overbearing door-to-door salesmen.

There are several running gags in Blondie, reflecting the trend after Chic Young's death for the strip to focus almost entirely on Dagwood as the lead character:

Colonel Potterby and the Duchess

From 1935 to 1963, Young also drew a topper, Colonel Potterby and the Duchess, a pantomime strip displayed beneath Blondie each Sunday.

While the distinctive look and running gags of Blondie have been carefully preserved through the decades, a number of details have been altered to keep up with changing times. The Bumstead kitchen, which remained essentially unchanged from the 1930s through the 1960s has slowly acquired a more modern look (no more legs on the gas range and no more refrigerators shown with the compressor assembly on the top).

Dagwood no longer wears a hat when he goes to work, nor does Blondie wear her previous hat and gloves when leaving the house. Although some bedroom and bathroom scenes still show him in polka-dot boxer shorts, Dagwood no longer wears garters to hold up his socks. When at home, he frequently wears sport shirts, his standard dress shirt with one large button in the middle is slowly disappearing, and he no longer smokes a pipe at all. Blondie now often wears slacks, and she is no longer depicted as a housewife since she teamed with Tootsie Woodley to launch a catering business in 1991. Dagwood still knocks heads with his boss, Mr. Dithers, but now does so in a more modern office at J.C. Dithers Construction Company where desks now sport flat panel computer monitors, and Mr. Dithers, when in a rage, attempts to smash his laptop into Dagwood's head instead of his old manual typewriter. The staff no longer punches in at a mechanical "time clock", nor do they wear green eyeshades and plastic "sleeve protectors". Telephones have changed from candlestick style to more modern dial phones, to Touch-Tone, and on to cellphones. Dagwood now begins each morning racing to meet his carpool rather than chasing after a missed streetcar or city bus. Even Mr. Beasley, the mail carrier, now dresses in short-sleeve shirts and walking shorts, rather than the military-style uniform of days gone by.

During the late 1990s and 2000–2001, Alexander worked part-time after high school at the order counter of a fast food restaurant, the Burger Barn. There are still occasional references to Cookie and her babysitting. Daisy, who once had a litter of puppies that lived with the family, is now the only dog seen in the Bumstead household. Cookie and Alexander can be seen in modern clothing trends and sometimes use cellphones, reference current television shows and social networking sites, while talking about attending rock concerts of popular current Rock, Pop, and Hip Hop music acts.

In this period, when in his basement woodworking shop, Dagwood was now shown wearing safety eyeglasses.

Dagwood sometimes breaks the Fourth wall by delivering the punchline to the strip while looking directly at the reader, as in the above panel. Daisy occasionally does the same, though her remarks are limited to "?" and "!" with either a puzzled or a pained expression.

Strips in recent years have included references to recent developments in technology and communication, such as Facebook, Twitter, email, and text messaging.

In 2005, the strip celebrated its 75th anniversary with an extended story arc in which characters from other strips, including Curtis, Garfield, Beetle Bailey, and Hägar the Horrible, made appearances in Blondie. The strip Pearls Before Swine made fun of the fact that their cast was not invited, and decided to invite themselves.[1] This cross-over promotion began July 10, 2005 and continued until September 4, 2005.[6][7][8]

Blondie in other media

Blondie was adapted into a long-running series of 28 low-budget theatrical B-features, produced by Columbia Pictures. Beginning with Blondie in 1938, the series lasted 12 years, through Beware of Blondie (1950). The two major roles were Penny Singleton as Blondie and Arthur Lake (whose first starring role was another comic strip character, Harold Teen) as Dagwood. Faithfulness to the comic strip was a major concern of the creators of the series. Little touches were added that were iconic to the strip, like the appearance of Dagwood's famous sandwiches—and the running gag of Dagwood colliding with the mailman amid a flurry of letters, (which preceded the title sequence in almost every film).

As the series progressed, the Bumstead children grew from toddlers to young adults onscreen. Larry Simms as Baby Dumpling (later known as Alexander) reprised his role in all the films. Daughter Cookie was played by three different child actresses, beginning in 1942 with her first appearance (as an infant) in Blondie's Blessed Event, the eleventh entry in the series. Daisy had pups in the 12th episode, Blondie For Victory (1942). Rounding out the regular supporting cast, character actor Jonathan Hale played Dagwood's irascible boss, J.C. Dithers (succeeded by Jerome Cowan as George M. Radcliffe in Blondie's Big Moment). The Bumsteads' neighbors, the Woodleys, did not appear in the series until the final film, Beware of Blondie. They were played by Emory Parnell and Isabel Withers.

Singleton and Lake reprised their film roles for radio; the Blondie radio program had a long run spanning several networks. Initially a 1939 summer replacement program for The Eddie Cantor Show (sponsored by Camel Cigarettes), Blondie was heard on CBS until June 1944, when it moved briefly to NBC. Returning to CBS later that year, Blondie continued there under a new sponsor (Colgate-Palmolive) until June 1949. In its final season, the series was heard on ABC from October 1949 to July 1950.

Two Blondie TV sitcoms have been produced to date, each lasting only one season.

An animated cartoon TV special featuring the characters was shown in 1987,[10] with a second special, Second Wedding Workout, telecast in 1989. Blondie was voiced by Loni Anderson, Dagwood by Frank Welker. Both animated specials are available on the fourth DVD of the Advantage Cartoon Mega Pack.

A counter-service restaurant called Blondie's opened at Universal Orlando's Islands of Adventure in May 1999, serving a traditional Dagwood-style sandwich. In fact, Blondie's bills itself as "Home of the Dagwood Sandwich." Lunch meats featuring Dagwood can be purchased at various grocery stores. 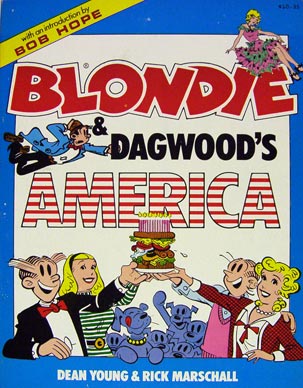 Retrieved from "https://heykidscomics.fandom.com/wiki/Blondie_Bumstead?oldid=1559323"
Community content is available under CC-BY-SA unless otherwise noted.