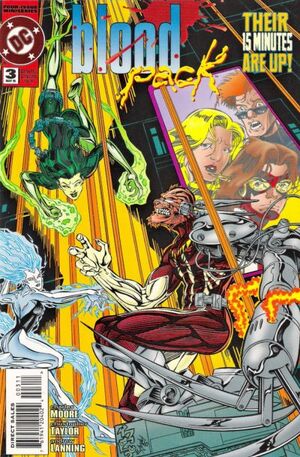 Hel-lo! Reality check! We are not a team. We're just weirdos paid to be together. And we sure as hell aren't heroes.

The Blood Pack learn that their producers have ulterior motives and Loria is really dead. They escape and contact the Titans, but are unable to enlist their aid.

Retrieved from "https://heykidscomics.fandom.com/wiki/Blood_Pack_Vol_1_3?oldid=1685201"
Community content is available under CC-BY-SA unless otherwise noted.