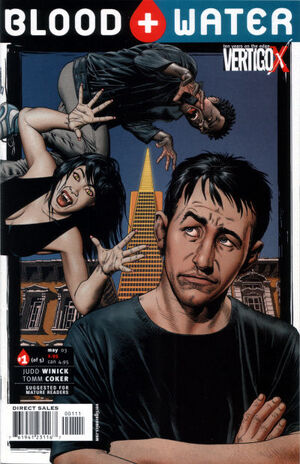 Three months after my twentieth birthday, I got food poisoning from Indian take-out. It was the Chicken Tika-Masala. It was sure good going down.

Adam Heller was once the star track and field athlete of his high school. Upon graduating from school however, he developed Hepatitis A. By the time he was twenty-years-old, the disease had nearly crippled his body and Adam teetered on the brink of death.

Currently, his only friends are a man named Joshua and Josh's girlfriend, Nicky. Josh and Nicky arrive at Adam's apartment one evening, and Adam tells them that he doesn't have long to live. Joshua asks if he would be willing to take any risk if it would extend his life. Adam says yes. Joshua reveals that both Nicky and he are vampires, and they possess the means to save Adam’s life – however, it would mean transforming him into a .

Upon seeing his friends demonstrate their vampiric abilities, Adam freaks out. He attempts to ward them off with a cross-shaped phallic symbol, but the two vampires merely laugh at him. Convinced now that he is truly in the company of the undead, Adam makes the most important decision of his life.

Retrieved from "https://heykidscomics.fandom.com/wiki/Blood_and_Water_Vol_1_1?oldid=1413710"
Community content is available under CC-BY-SA unless otherwise noted.