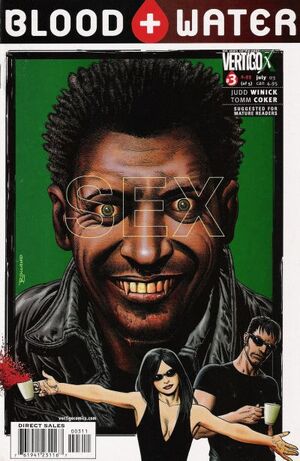 Dude, I've been suffering from Hepatitis and liver failure for years. I'm on the varsity squad of vomiting. I can take it.

Adam Heller is now a vampire. He has shed his excess body weight, and no longer requires a cane. Nicky goes out to procure some nourishment, leaving Joshua to take care of Adam during the final stages of his transformation. Donning a raincoat and waders, he warns Adam that he will soon regurgitate his internal organs. As one of the undead, his body no longer requires them. Adam spends the next three hours throwing up his insides. He fills the bathtub three times.

Over the course of the next several nights, Adam adjusts to his new powers. He loves all of the new sensations that his body is experiencing and the three of them spend every night engaging in sordid bouts of debauchery.

At the close of one evening, Adam and Josh have a long conversation and Adam returns home. Soon after, something swoops down out of the sky and grabs Joshua. It practically tears him limb from limb and tosses his mutilated body through Adam's window. Before dying, Joshua makes Adam promise that he will not attempt to resurrect him.

Retrieved from "https://heykidscomics.fandom.com/wiki/Blood_and_Water_Vol_1_3?oldid=1413712"
Community content is available under CC-BY-SA unless otherwise noted.