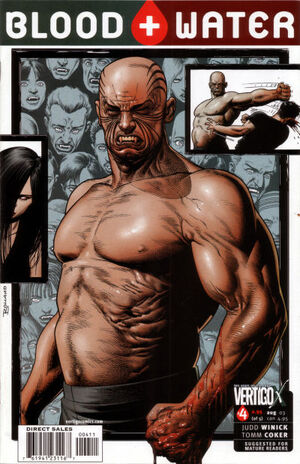 No. All of this is because of me. It killed Josh. It's gonna kill me and you. We don't run. We fight.

Nicky arrives at Adam's apartment and finds Joshua dead. Losing all composure, she blames Adam and begins slamming him against a wall. Adam eventually gets her to calm down, but Nicky wants to resurrect Joshua. She knows that such an act would transform her former lover into a zombie-shell of the man she once knew, but Nicky is incapable of rational thought right now. Adam tells her that Joshua didn't want to live as an undead zombie.

Nicky and Adam collect his body and begin driving towards Santa Cruz for a funeral ritual. When they arrive, dozens of vampires from all over the world come to pay their respects. All of them psychically felt the moment that Joshua died. Several vampires cremate their friend’s remains.

Attending the service is an ancient named Malcolm. Malcolm was once part of a sect known as the Taveen – vampires who hunted rogue vampires. However, he states that there is little he can do to trace Joshua's killer. Adam snaps and gets into a fight with Malcolm. Miraculously, he punches the older vampire clear across the glade with a single blow. For a neophyte vampire to execute so powerful an attack against an ancient is virtually unheard of.

Nicky and the others begin to realize that Adam is more than just a regular vampire. He is the direct descendent of a race of super-vampires known as the Tribe. Nicky tells him that when Joshua and she turned Adam into a vampire, it awakened some of the ancient Tribe creatures. They further theorize that a Tribe member is responsible for destroying Joshua. Committed to avenging their friend’s death, Adam and Nicky take to the road in search of the Tribe.

Retrieved from "https://heykidscomics.fandom.com/wiki/Blood_and_Water_Vol_1_4?oldid=1413713"
Community content is available under CC-BY-SA unless otherwise noted.