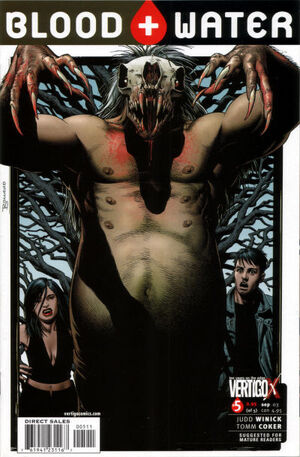 Adam and Nicky go to Adam's apartment where the neophyte liberally consumes several gallons of blood. Adam learns that he is actually a direct descendant of a race of mutated vampires that feed on other vampires. One of these creatures is responsible for the death of Joshua.

Adam and Nicky go to Golden Gate Park – ready to face down Joshua's killer. Several grotesque monsters lumber out of the woods and attack them. A vampire hunter named Malcolm arrives and assists Adam and Nicky in taking down the monstrous beasts. Adam communes with one and learns that they do not desire his death at all. In fact, they wish to mate with him in order to propagate their specific bloodline. Adam finishes the creature off and they pile the bodies onto a funeral pyre.

After the battle is finished, all three adventurers go their separate ways.

Retrieved from "https://heykidscomics.fandom.com/wiki/Blood_and_Water_Vol_1_5?oldid=1413714"
Community content is available under CC-BY-SA unless otherwise noted.