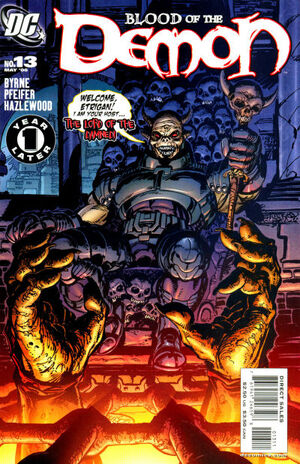 A great deal has happened in the past year... very little of it good.

Etrigan swims through an underwater jungle of corpses lashed to wooden supports, reaches a trap door, and punches through. Within a wooden cellar is Harry Matthews, chained up by a group of bald men in monk's robes, save one who appears to be in an antiquated diving outfit. Etrigan bloodily dispatches the monks, leading Harry to feel concern that Randu Singh is easing up on his controls. Once Harry is freed the two race upstairs to find themselves in a church. Harry recites the incantation that transforms Etrigan into a dazed and disoriented Jason Blood, and the two emerge in Venice.

Meanwhile in Gotham City, Randu Singh laments that Etrigan is harder to control. He goes to see his wife Anjeli Singh, who is still scarred from the fire of Jason Blood's home one year ago. She no longer wishes to see him. Meanwhile, in a far away fortress, a demonic being known as the Lord of the Damned, whose face is similar to Etrigan's, keeps a red-eyed prisoner caged. Meanwhile in an east coast prison, former detective Sandra Kincaid is being held for hijacking a tank and firing on downtown Gotham. Her friend Pruitt does not see much hope for her appeal.

In Venice, Jason Blood is acting distinctly zombie-like. Harry Matthews calls Randu Singh, who reveals that this is a false Jason, created to help them track down the real Etrigan. The false Jason guides Harry to Castle Branec in Eastern Europe, where Etrigan made his first modern appearance. They are met by Inspector Kurtzberg, and the three are attacked by the castle's statues, and then by an image of Merlin who claims the castle is yet another of his tombs. Harry transforms Jason into Etrigan, but Randu is not ready to control the transformation and he collapses in his Gotham home. When Merlin realizes that this Etrigan is just an empty shell, Harry reveals that the Etrigan they are tracking is the Etrigan they stole from the old west after Jason Blood died. Merlin explains that without a soul the false Blood/Etrigan Randu created will continue to grow more wild, and that he is beyond Merlin's control. Meanwhile the Lord of the Damned's prisoner is revealed to be, in fact, Etrigan.

Retrieved from "https://heykidscomics.fandom.com/wiki/Blood_of_the_Demon_Vol_1_13?oldid=1506379"
Community content is available under CC-BY-SA unless otherwise noted.