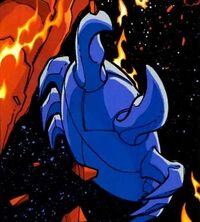 The Reach are a civilization of alien conquerors who take over planets for profit. Millennia ago, they came into conflict with the Green Lantern Corps - and were able to force the Lanterns to a draw.

The Reach and the Corps drew up a treaty, with terms prohibiting the Reach from taking over any more worlds. As a result, the Reach devised more deniable methods of conquest, methods that would enable them to take over a world without anyone realizing until it was too late.

Central to the Reach's plans were the Scarabs, a hive-mind native to Space Sector 2. The Scarabs were living weapons, genetically engineered by the Reach and programmed to be obedient to them. The typical plan was to leave a Scarab and its database on an inhabited world; when that planet reached certain technological milestones, the Scarab would activate and bond to one of the native inhabitants. The Scarab would overwrite the host's personality with the Reach's programming, creating an infiltrator in the Reach's service, armed with the Scarab's vast range of lethal weapons. Millennia ago, the Reach secreted one of the Scarabs on Earth, awaiting the day when it would awaken and summon its masters.

According to legend, the Scarab eventually came into the possession of Pharaoh Kha-Ef-Re, who used its powers to help rule his kingdom, defending his people against evil. What is known for certain is that the Scarab was buried with Kha-Ef-Re when he died, safe inside the Pharaoh's tomb. Over the centuries, thousands died attempting to claim it for their own, but the Scarab remained untouched, resting atop Kha-Ef-Re's sarcophagus.

Archaeologist Dan Garrett had heard the stories of Kha-Ef-Re, and sought out the Pharaoh's tomb himself. He succeeded, becoming the first person in thousands of years to reach Kha-Ef-Re's sarcophagus, and the Scarab which waited there.

At some point since the Reach left the Scarab on Earth, however, it had become infused with magical energies, half-awakened by their power. When Dan touched the Scarab, it granted him the name and powers of the Blue Beetle - but it did not transform him into a Reach infiltrator. For years, Dan used the Scarab's powers to fight an array of villains and monsters.

Dan's career came to an end, however, when a student of his, Ted Kord, asked him to help stop Ted's uncle from taking over the world. Dan was killed in the ensuing battle, but Ted managed to retrieve the Scarab, hoping to use it to continue Dan's legacy.

Unfortunately, despite Ted's best efforts, he couldn't make the Scarab work for him. He eventually set it aside, taking up Dan's legacy as the second Blue Beetle and fighting crime without the help of its powers.

When the Crisis on Infinite Earths struck, Ted discovered the Scarab was able to hurt the attacking shadow-monsters - but lost it in the turmoil.

Knowing that Ted had lost the Scarab during the first Crisis, Booster Gold traveled back in time from Mister Mind's attack on the new Multiverse formed at the end of Infinite Crisis, and retrieved it to use as a power source for Supernova's costume in their fight against Mind.

Eventually, the Scarab was returned to its intended place in the timeline, a short while later in Ted's career, some time after the Crisis on Infinite Earths. The Scarab seemingly resurrected Dan Garrett, who went on a half-crazed rampage looking for Ted. When Ted finally confronted Dan, the Scarab communicated with Ted, saying it had been looking for a new host - and had chosen Ted for the role. The Scarab attempted to persuade Ted by offering him the use of its powers, but Ted refused. He convinced Dan to break the Scarab's hold over him, shattering the Scarab's physical form and letting Dan die a final death.

The Scarab resurfaced once more near the end of Ted's life. It had been recovered from a temple in Egypt, seemingly untouched, and Hawkman had passed it on to Ted. However, the Scarab was powerless again, as it had been at the start of Ted's career, and still did not respond to him.

When Ted's house was blasted by a bolt of energy from Brother Eye, the blast re-energised the Scarab. Ted used it to try and find Captain Marvel, who he hoped might be able to tell him where the energy bolt had come from. The Scarab led him to the entrance of the Rock of Eternity, home to the wizard Shazam, who gave Captain Marvel his powers.

Ted asked Shazam about what was happening, and Shazam conjured visions from the Scarab to illustrate his explanations. Shocked by one of the visions, Ted dropped the Scarab - and Shazam returned him to Earth before he could pick it up.

The search for answers eventually led Ted to Checkmate headquarters in the Swiss Alps, where he met his fate. The Scarab, however, remained on the Rock of Eternity with Shazam.

During the Day of Vengeance, the Rock was destroyed in magical battle between Shazam and the Spectre, its fragments blasted across the globe. The Scarab came down in El Paso, Texas, trailing portents and fire behind it.

High school student Jaime Reyes discovered the Scarab half-buried in a disused lot. Fascinated, he took it home with him. That night, as Jaime slept, the Scarab awoke, its parameters finally fulfilled, and grafted itself to Jaime's spine, selecting him as its host - the new Blue Beetle. However, because the Scarab was separated from its database, it couldn't overwrite Jaime's personality with the Reach's programming, which meant Jaime retained his independence and free will.

Booster Gold - an earlier Booster, one from /before/ the fight with Mister Mind - sought Jaime out. In an ironic twist of fate, the Blue Beetle Scarab was the one thing that could find Brother Eye, being able to see outside normal time and space. Jaime went up with Booster, Batman, and a team of others Booster had identified, a team which included Green Lanterns Hal Jordan and John Stewart.

The Scarab negated Brother Eye's vibrational frequencies, pulling it back into this Universe. Together with Black Canary and Green Arrow, Jaime destroyed Brother Eye's dimensional stabilizer, preventing it from escaping outside reality.

Once Brother Eye was knocked out of orbit, the Scarab, identifying the Green Lanterns as the 'enemy', shifted Jaime's vibrational frequencies, moving Jaime and the Scarab into the Bleed. However, time in the Bleed was dilated for Jaime and the Scarab; a couple of minutes for them was one year back on Earth.

Jaime finally came back down to Earth, landing in the desert outside El Paso. As he attempted to put his life back together after his year-long absence, he found the Scarab was an active presence in his mind, a decidedly homicidal one. Fortunately, Jaime was able to restrain the Scarab's impulses and prevent it from killing.

As Jaime began learning how to put the Scarab's powers to good use, the Peacemaker showed up, revealing the Scarab's origin as an extraterrestrial artifact, setting Jaime on course to find out about the Scarab's background.

The Scarab's awakening a year before had drawn the Reach's attention, bringing them to Earth to assess their latest infiltrator. When they met Jaime, however, they discovered that he wasn't under the Scarab's control, that he was able to restrain its homicidal programming, and that the Scarab was developing its own free will and independence.

This did not sit well with the Reach, who saw Jaime and the Scarab's independence as an active threat. They presented themselves as respectable galactic traders to the general public, while behind the scenes they set about their plans to conquer Earth - and destroy Jaime and the Scarab before the duo could stop them. Jaime, in turn, attempted to find out what the Reach were up to, and how he could stop their plans before it was too late. Finally, they managed to uncover the Reach's scheme and destroy it, but also ended up destroying any evidence of the scheme as well.

By this point, the Scarab had become an independent, free-willed entity in its own right, taking the serial number the Reach had given it, Khaji Da, as its name. Together, Jaime and the Scarab devised a plan to bring the Reach down before they tried conquering Earth again.

Jaime allowed himself to be captured by the Reach, giving the Scarab the chance to hack into the Reach's computers and broadcast their invasion plans worldwide. The Reach's Negotiator, driven to breaking point, ordered Earth's destruction - but again, Jaime and the Scarab intervened, stopping the world-rippers before they could be activated.

The Reach were forced to withdraw, claiming that the Negotiator had 'gone rogue'. The Scarab, however, had had a conversation with the other Scarabs onboard the Reach ship - a little surprise for the Reach.

The Scarab has manifested a number of different abilities over the years for its users.

Independent: On its own, the Blue Beetle Scarab has been seen to manifest the following abilites:

Ted Kord: Ted Kord was intelligent enough to decode the Scarab's programming, but due to the multiverse energy overload brought on by Booster Gold's interference, and the damage from its exposure to magic, the Scarab was virtually nonfunctional. Its basic abilities were limited to momentary and sporadic fluctuations in its lower level, but otherwise commonly seen, abilities.

Jaime Reyes: The Scarab has displayed the following abilities since its bond to Jaime Reyes. It can opt to use its powers of its own accord, though it typically defers to Jaime. However, if Jaime doesn't want the Scarab to use a power, he can override it. Should Jaime fall prey to a body-controlling power, the Scarab will take control of the armor.

Some of the Scarab's powers can function regardless of whether the armor is active or not; others, however, only work when the armor is in use. Those powers that depend on the armor are listed under its heading.

According to Jaime, the Scarab has a number of 'options' beyond those listed below, some of which are apparently capable of destroying a city.

Retrieved from "https://heykidscomics.fandom.com/wiki/Blue_Beetle_Scarab?oldid=1622413"
Community content is available under CC-BY-SA unless otherwise noted.