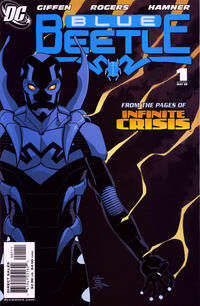 I got magic armor... dunno how it works. Got a magic rock inside my body... can't get it out... Went into outer space n' helped them... but now the superheroes hate me, gonna kill me... I'm the Blue Beetle.

Present:
The Blue Beetle slams to earth like a meteor and is suddenly attacked by the Green Lantern Guy Gardner. Gardner notices he is fighting a kid and stops yelling to his power ring that he will not hurt kids. The man comes to his senses and remembers why he was searching for the boy. His power ring responds to the Blue Beetle, giving him the worse migraine he ever had, investing him with the desire to kill the boy. Gardner leaves Jaime alone in the open, explaining he can't deal with him just yet. The armor powers down and Jaime is in intensive pain. As he walks in the nude in the wilderness, he accepts that he is alone.

Earlier:
Jaime, Paco and Brenda are on their way to school and discover the Blue Beetle Scarab under a pile of sand. Jaime decides to take it with him. Later that day, he discovers that his dad's assistant, Luis, didn't show up for work today and offers to work a few shifts in the garage for his overworked dad. His father refuses.

That night, he has a strange dream in a language that his didn't know. Jaime is unaware that the Scarab has crawled under his skin and attached itself to his spine.

The next day on his way to school, he encounters a woman with no eyes that has a strange interest in him.

Retrieved from "https://heykidscomics.fandom.com/wiki/Blue_Beetle_Vol_7_1?oldid=1415477"
Community content is available under CC-BY-SA unless otherwise noted.