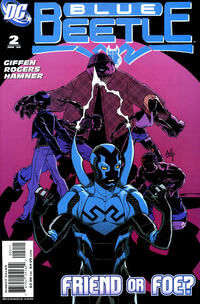 What the hell are you? Ain't never seen... That kid even in there any more?

Earlier:
In the break at school, Jaime encounters the woman with no eyes again, this time accompanied by another man. He learns that the man has surrounded them with a damper field and Jaime is the only one who can see them. As the woman scans for his powers, the Scarab lashes out at her. Unaware that it was the scarab, the man carries the woman off, telling Jaime that he made a big mistake messing with the posses.

Later at the garage, Jaime hears that he is allowed to work part time in the garage now. He notices the man from last time accompanied by a small group of thugs. They manage to corner him in an alley and Jaime tells the group once again that it wasn't him that hurt the woman. A woman named Bonita tries to read his mind. Suddenly, the armor goes on to break the woman's arm and in the process, he starts beating up the group. As Jaime arrives at home he somehow learns that Bonita is pregnant.

As he climbs to the window, he hears an argument. His parents worry over why he hasn't come home today. His father goes to check on him, convinced that his wife just missed him come in.

Present:
Jaime stumbles around somewhere in Texas naked. His first priority is to acquire some pants, so he steals an old shirt from the dumpster near a gas station. He is suddenly surprised by the owner holding a hand gun who had him confused for a coyote. He offers him what was in the bin (it was a "good will" dumpster after all). Jaime lies about his condition, telling the man that he was robbed and dumped nearby. The man is even friendly enough to give him something to eat and offers him a place to stay.

On the way, he offers Jaime his phone to call his parents, but he declines, not wanting to worry his mother too much. As Jaime climbs to the window into his own room, he surprises his little sister that is sleeping there. Afraid, she cries for her parents who come to her aid. They find that their son has returned after a whole year.

Retrieved from "https://heykidscomics.fandom.com/wiki/Blue_Beetle_Vol_7_2?oldid=1415443"
Community content is available under CC-BY-SA unless otherwise noted.