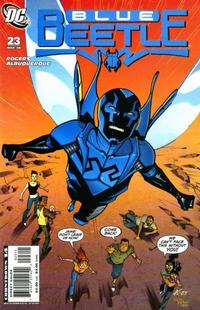 A star-spanning race, paralysed, waiting to see what a underpowered child does next. How is that encouraging, exactly, Negotiator?

After long consideration, Jaime Reyes figures out how to counter-attack the Reach and its minions by taking the fight to them, but at what cost...?

Retrieved from "https://heykidscomics.fandom.com/wiki/Blue_Beetle_Vol_7_23?oldid=1415461"
Community content is available under CC-BY-SA unless otherwise noted.